This Child is Born for Us

Around mid-afternoon on this Christmas Eve, our city was shrouded by a dense fog. It had been a quite pleasant day—mild, for December on the prairies, sunny, calm. It felt like late fall rather than the dead of winter. And then the fog descended. It was so thick that at times I could barely see twenty metres in front of me on my drive to church for our Christmas Eve service.

It’s quiet as I sit here, an hour or so before our Christmas Eve service begins. The songs have been rehearsed, the readings distributed, the candles prepared. Most of the logistics have been taken care of (or so I am pleased to imagine… I have no doubt forgotten something!). The sun has set outside the window of my study, but the fog is still visible. It somehow seems an apt metaphor for Christmas Eve. Mary, Joseph, the shepherds, the wise men, the ordinary citizens of ordinary Bethlehem… most saw very little and understood even less of what took place that first Christmas. The events were shrouded in a kind of hope-drenched mystery. You couldn’t see very far from there. Few would have had any idea what this baby boy would come to do and to be for the world. Jesus would have to take the story from there, leading and guiding (sometimes dragging) his people along into the light of life.

I probably post this quote from Dietrich Bonhoeffer every year at Christmas. It seems like it, at least. But it’s among my favourite quotes of the season: 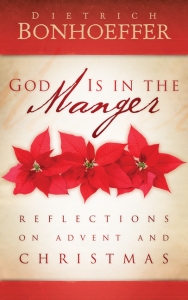 A child is placed here at the midpoint of world history—a child born of human beings, a son given by God. That is the mystery of the redemption of the world; everything past and everything future is encompassed here. The infinite mercy of the almighty God comes to us, descends to us in the form of a child, his Son. That this child is born for us, this son is given to us, that this human child and Son of God belongs to me, that I know him, have him, love him, that I am his and he is mine—on this alone my life now depends. A child has our life in his hands.

This child does, indeed, have our life in his hands. All of him for all of us.

Happiest of Christmases to all.

The image above is taken from the 2019-20 Christian Seasons Calendar. It is called “Simeon” by Barbara Februar.

From: Uncategorized
← Tuesday Miscellany (On Going to the Gym, Pillow Forts, Trust and Change)
2019 in Review →
5 Comments Post a comment