ABBA Essentials and the Perils of Unlimited Choice 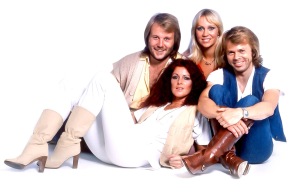 “What do you wanna listen to now?” My wife asked me this question a handful of times from the passenger seat as we made our way over the Rockies and back to help our kids settle into college last weekend. Twenty-five hours in transit gives you plenty of time for listening to stuff, whether it’s podcasts, audio books, or music. Each time the question came, I would half-heartedly ponder the request for a few seconds and then respond with something along the lines of, “Um, I don’t know, nothing’s really coming to mind… I kinda need to see my options.” My wife would then furrow her brow at me, scroll through Apple Music on one of our phones, and then usually end up picking either something that one of us had downloaded recently and was thus near the top of our screens or something we had listened to in the past.

As we were rolling back into town late last night, I found myself pondering my inability to think of something to listen to. Twenty-five years ago, if you would have told me that one day I would have an almost limitless musical library accessible at my fingertips in my car—that I could almost literally listen to anything I wanted to on demand—I would have, a) said you were crazy; and, b) thought this would be about the best thing imaginable. Twenty-five years ago, I was driving a baby blue rusted out Volkswagen Rabbit that I shared with my twin brother. We had an after-market cassette player hammered into the dash and a crudely wired set of speakers bouncing around in the hatchback. We may have had twenty cassette tapes to choose from when it came to musical selection. If you got tired of those options, you were stuck with the radio, but the stations in our small city left a bit to be desired.

In that context, the question “What do you want to listen to” would have operated within very fixed (and sadly inadequate) parameters. My options were confined to the music that I had saved up to purchase and whatever happened to be on the radio. I would have loved the idea of being able to listen to whatever I wanted whenever I wanted to listen to it, but that possibility existed in some barely believable fantasy land along with driverless cars and being able to record sports and watch without advertising. But, strangely, now that unlimited musical choice on demand in one’s vehicle has moved from the category of “fantasy” to “reality,” I am unable to come up with anything. What gives?

Well, it turns out that limitless choice can have a profoundly limiting effect. Innumerable options often have a paralyzing effect upon our decision-making. This is as true for the bleary-eyed shopper trying to choose between thirty different kinds of toothpaste as it is for many young adults on the threshold of college or vocational training trying to decide what to do with their lives when the options are (or at least are described as) endless and they can “be anything they want to be.” Our brains don’t seem to do so well with unbounded options and choices.

In this context of semi-paralysis produced by limitless choice, we tend to reach in three directions (at least in my experience). We reach for what is recent, what is familiar, and what is comfortable. This is precisely what I often do when it comes to picking music. Occasionally, I’ll scroll through unknown playlists and random artists, but more often than not, I’ll look to see if there’s anything new by an artist that I know and trust (Apple Music’s algorithms magnanimously serve these up to me daily on their “For You” tab). If there’s nothing new, I’ll just listen to an old album from the past. Who wants to wade through all kinds of unfamiliar (and potentially bad) music to find the odd gem? Who wants to spend precious minutes searching with no guarantee of a good result? I’ll stick with what I know, thank you very much. Or what the algorithm predicts that I’ll like.

It’s possible, dear reader, that you have more disciplined and cultivated musical habits than I do (not to mention more patience). And by “possible” I mean “highly likely.” But what is true for me when it comes to accessing music is, I suspect, true for many of us when it comes consuming media and forming/maintaining our views about the world more broadly. In the vast ocean of world news and media content that is daily produced for us to sift through, we tend to reach for the recent, the familiar, and the comfortable. We can’t possibly wade through it all—there’s simply too much content and it never stops growing. We don’t have the bandwidth. So, we tend to gravitate toward whatever is trending at the moment (the recent) or content from a handful of sources that we’ve gotten used to reading over the years (the familiar) or media that we’re quite certain will reflect our preferred views (the comfortable). It’s the intellectual equivalent of resignedly listening to ABBA Essentials for the fifth time on a drive out to Vancouver (to pick a random, non-hyperbolic example not at all specific to my wife’s musical tastes), but it’s easier than the alternatives, right?

The problem, of course, is that this phenomenon tends to have a profoundly narrowing effect, whether we’re talking about music or politics or religion or anything else that matters to us and shapes our collective life. If we can’t be bothered to engage with voices that aren’t new (“trending”), familiar, or comfortable, we will quite quickly find ourselves operating with a fairly truncated “playlist.” We will default too easily to reacting (for or against) the new, to taking refuge in what we already (think we) know, and what reinforces what we already think. And we will continue to exist in ideological silos, walled off from one another, incapable of encountering a different song that might inspire us along more life-giving paths.

These are challenging times, to be sure. Our brains struggle to cope with the volume of content that is generated in the information age (to say nothing of the motivations behind said content amidst the proliferation of “fake news”). It’s not an easy context in which to be a person of both conviction and openness to difference. Perhaps it will require deliberately disengaging from some of the more toxic forms of media that have sort of just settled into our everyday lives. Perhaps it will involve attending to the local at the expense of the global. Perhaps it will require simply unplugging from the noise for a while (maybe even a very long while) and being reminded that sometimes limitations are good, healthy, and necessary things.

From: Culture, Discourse, Music, Technology/Digital Culture, The Lighter Side, Travel
← On Cheerleading
The Pandemic as Moral Laboratory →
2 Comments Post a comment