What’s on the Other Side? 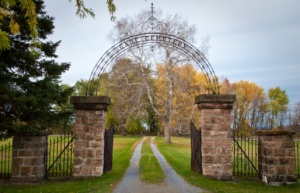 Last Friday a pastor from the mainland phoned me up and asked if I would be willing to do a graveside ceremony for a family who was returning the body of their loved one to Nanaimo for burial. I still find it very strange to be entrusted, in however minimal a fashion, with these significant events in people’s lives, but I also find it very difficult to to say no to a friend. So, today I was off to say a few words at the burial of a stranger, hoping and praying that something I said would be of some comfort to those present.

It’s tough to be a part of one of these things and not think about the nature of death, the afterlife, etc. During the ceremony, I made a few references to the newness of life to come after this one is over. But what did/do I mean by when I make such references? The word “heaven” is a notoriously vacuous one capable, it seems, of being filled with whatever content happens to be desirable in a given situation. It could mean anything from floating on clouds with harps to the 19th hole in the sky to a really, really, really awesome worship concert that lasts forever. Heaven becomes the place where whatever we happened to enjoy most or brought us the most satisfaction in this life is guaranteed for eternity. To say that the term “heaven” lacks precision would be putting it mildly.

As per my earlier pledge, I’ve been reading N.T. Wright’s The Resurrection of the Son of God over the last couple of weeks. At this early stage of the book, he’s simply clarifying terms and laying the historical groundwork for his discussion of what Christians meant when they claimed Jesus had been “raised from the dead.” In chapter two, Wright traces belief in the afterlife from the Homeric period, where the dead were little more than mindless, shadowy phantoms in a murky underworld, to Plato, where death afforded the opportunity for disembodied souls to achieve their true, most perfect state, to the Roman age, which held out the possibility, albeit a remote one for ordinary folk, of attaining divinity in the life to come.

What is crucially important for Wright—what will weave its way throughout the argument set forth in the next 600 pages—is that resurrection was not one of the options on the table. The idea that God might grant new physical life to human beings who were dead was (and is) utterly unique. The doctrine of the resurrection proclaims that physical stuff matters to God, that our “true selves” are not souls, but all of who we are as psychosomatic unities.

I’m not sure what the folks at the graveside were thinking about as we went through the ceremony today. I suspect the implications of Christ’s resurrection were not uppermost in their minds. But like Wright, I am convinced that how and what we think about what’s on the other side of death does matter. Resurrection validates this life as real and important; it says that all of creation (not just “spirit stuff”) is worthy of redemption.

And what might this final redemption look like? Undoubtedly the detail we might like is still lacking. That’s to be expected, given the nature of the topic, I suppose. But at the very least, the resurrection of Christ says that more of what matters to us matters to God. That is something truly hopeful, from my perspective, and eminently worth sharing. Even (especially?) with a handful of total strangers.

I read this in Marilynne Robinson’s Gilead this week. The words are put in the mouth of an 85 year-old Presbyterian minister in failing health around the middle of the twentieth century. I could think of worse ways to say envision what’s on the other side:

Boughton says he has more ideas about heaven every day. He said, “Mainly, I just think about the splendors of the world and multiply by two. I’d multiply by ten or twelve if I had the energy. But two is much more than sufficient for my purposes.” So he’s just sitting there multiplying the feel of the wind by two, multiplying the smell of the grass by two.