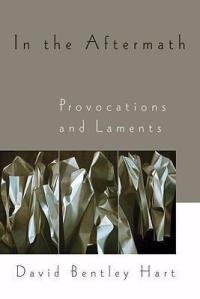 I remember a friend from graduate school remarking last year about the experience of reading David Bentley Hart and the challenge to one’s vocabulary this presented.  While I have not read Hart’s magum opus (The Beauty of the Infinite), I did enjoy The Doors of the Sea and am currently making my way (slowly) through his recent collection of essays entitled In the Aftermath: Provocations and Laments.  Let’s just say that the online dictionary is getting a workout…

Just for fun, I submit the following two sentences (yes, they’re each just one sentence) as exhibits A and B in the category of “ridiculously impenetrable passages of David Bentley Hart.”  The first, from an essay entitled “Religion in America”:

The station’s oblong pillars were blackly begrimed; shreds of posters in garish hues hung limply from the walls; in shallow depressions of the concrete floor opaque pools of oleaginous water glistened with a sinister opalescence; an astringent chemical odor of antiseptics, vying with various organic purulences suffused the damp air; a scattering of gaunt torsos farther along the platform bore eloquent witness to the malaise of Britain’s post-war gene pool; and nothing was out of the ordinary.

Nothing except that sentence, I suppose!!  And there’s more in “A Most Partial Historian”:

At the level of general culture, England is post-Christian in ways that no one with a finite life should have the patience to enumerate—the deepening coarseness of popular culture, the spreading violence, Britain’s pervasive malice towards its own cultural inheritance, a demographic inanition, infantile politics, an almost total dessication of hunger for transcendence—and while it is commendable that Cowling denies himself the glamour of the unheeded Cassandra, or of the dour encomiast possessed of desolate omniscience, one must observe that an ancient and syphillitic demimondaine is unlikely to revert to virgin purity.

One must, indeed.  Actually, as much as I would love to join you, Prof. Hart, in your observation of whatever phenomenon this sentence happens to be describing, I’m afraid that you’re just going to have to use a few smaller words.

Despite the challenge (to one’s vocabulary and one’s pride) of reading Hart, I do find him to be a wonderful writer and an incisive (sometimes vicious!) cultural critic.  And as I was looking up his books online, I noticed that he has directed his savage pen at the “new atheists” in his most recent work.  Too bad this didn’t come out a year or so earlier—even if it didn’t contribute anything substantially new to my subject, I could have at least thrown a few impressive sounding polysyllabic words into my thesis!

From: Books, Quotes, Random Musings, The Lighter Side
← Our Thoughts are With You
Preaching →
11 Comments Post a comment