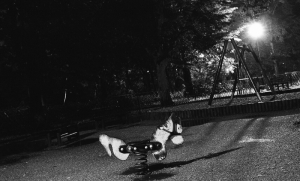 Schlaflosigkeit. The German word for insomnia.

Our family is currently visiting dear friends in Germany and my body is performing its usual stubborn revolt against the rude imposition of foreign time zones and unfamiliar schedules. I’ve been tossing and turning since five am after only falling asleep around one. Eventually, as always, I give up. Sleep has never been the kind of thing I can force.

Yesterday, over coffee, my friend told me that she’s been thinking a lot about whether or how God speaks through dreams and what they might mean. She’s started keeping a notebook by her bed to write down her dreams as soon as she wakes up. She wants to be open to the voice of God. I told her that I hardly ever remember what I dream and that even when I do, they are so incoherent that I could hardly imagine them meaning anything. I disliked how the words sounded even coming out of my mouth. Sometimes I weary even myself with my skepticism.

I had a vivid dream last night. Of course.

I was in a restaurant with our German friends and my meal was the last to arrive. It was a hamburger. Actually, it was a burnt bun with what looked like a lump of black charcoal in it. The waiter was a little old man with a hunched back. He looked about eighty years old. He looked very sad and tired. I told him that my hamburger was overcooked and that I couldn’t eat it like this. He reached toward my plate and with his bare hands took out the hamburger and what was left of the tomato, lettuce, etc., leaving me with a crunchy, blackened bun. “I’m not eating this,” I said, looking incredulously at what was left of my dinner. “This is burnt, too.” He threw his apron on the table in disgust, yelled that he quit, and walked out the front door of the restaurant.

I stared forlornly at the remnants of my dinner. I scratched my head at what I had just seen. All around, my friends were eating their delicious-looking meals, seemingly oblivious to the bizarre drama that had just unfolded. And, rather insensitively, to my lack of dinner. I thought about the little old man. I felt guilty. I’m quite skilled in the art of guilt.

I went partway down the street when I saw the little old man. He was sitting on the top of a slide in an abandoned playground. I went to greet him, anticipating the aforementioned warm shared moment. Hi there, I began, I just wanted to make sure that you knew that there were no hard feelings… The man climbed down off the slide and began to berate me. Every week you stand up in front of people with your fancy words… (the man now knew that I was a pastor, apparently… dreams obviously shift quite seamlessly between different domains of life, unconstrained by the rational boundaries we expect and demand) … It’s like you think you’re some kind of angel and you and go on and on about sin and I’m tired of it!

I began to protest that I didn’t actually talk about sin that much and to demand examples and to try to understand what he was specifically referring to and to feebly appeal to the idea that it’s sort of hard to preach from the bible while ignoring the concept of sin entirely. I even entertained illusions about trying to make a logical connection between the old man’s rantings about sin and my burnt burger and the incomprehensibly disproportionate response that he was having to my quite legitimate protestations. He was having none of it. I was a hypocrite, he said, and it was high time I knew it. All of a sudden there were many other people in the playground and they began to form a circle around me, closing in, closing in, accusatory fingers pointing…

I woke up in a sweat, a frail old man’s anger ringing in my ears. I looked around the room, frantically trying to get my bearings. I thought about my conversation with my friend the previous day about how God speaks through dreams and about the importance of being ready for them. I wondered what on earth God might be saying to me through a burned hamburger, and an angry, wounded little old man in a lonely playground. I wished for clearer dreams. Maybe seven cows coming out of a river or something.

I tossed and turned for forty-five minutes, trying to either figure out the dream or to be relieved of the burden by falling back asleep. Or neither, as it turned out. Schlaflosigkeit instead.

And so now I’m sitting at a kitchen table in the pre-dawn stillness of a German morning pondering what it all might mean. Or if I should even be asking the question. Maybe my dream has less to do with God than a combination of jet lag and indigestion. Probably.

Or maybe, just maybe, dreams really are one of the ways that God can chip away at the pride and hypocrisy that are never too far beneath the surface of my life. If God can speak through cows coming out of a river than I suppose a blackened burger and a logic-bending conversation in a playground aren’t entirely out of the question. Maybe the lesson here, as is so often the case, is simply to be merciful, as I have received mercy.

Or that fancy words aren’t worth a whole lot if they’re not accompanied by humility.

Or to keep a notebook by my bed from now on.

Or to just shut up and eat what I’m served.

Speak, Lord. Your servant is (inadequately and uncomprehendingly) listening.