In Search of a Soul 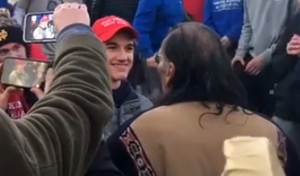 It’s a rare thing indeed to observe members of the media from across the left-right spectrum offering something like a collective mea culpa in response to how they reported something. But this is, incredibly, what is happening in the aftermath of the storm generated by the already infamous video of the encounter between the Covington Catholic boys, the Native American elder, and the Black Hebrew Israelites at the Lincoln Memorial last week.

A relatively ordinary dustup at a protest that probably wouldn’t even have been news before the dawn of the smartphone touched off a quite predictable conflagration of outrage and virtue signalling and the reinforcing of moral and political narratives. When the story turned out to be a bit more complex, a bit more resistant to tidy narratives of obvious good vs obvious evil, some journalists did a peculiar (and commendable) thing. They said, effectively, “We should have resisted the hot take. We were too quick to judge in ways that served our preferred version of the story.” In some cases, there were even calls to withhold judgment (can you imagine?!) going forward. To take a step back. To ask inconvenient questions. To be the adult instead of the reactionary child.

Of course, these sober pleas probably won’t live long in our collective memory. Like everything else on the internet, they will disappear after their few hours on the online shelf, to be replaced by the next shiny digital object. “Cold takes” don’t sell, obviously, and as long as there is money to be made on online outrage, people will continue to be shepherded toward snap judgments and the stoking of inquisitional flames. Our dopamine-hungry brains will continue to obediently trawl the internet for vindication of our views. These calls for more measured responses to the news of the day (or what passes for it) will bounce around for a while in the aftermath of the Covington fiasco, but I doubt we will learn much from them. The next viral video of the next outrage-worthy offense will offer us the next opportunity to perform and parade our righteousness online. And we will, I suspect, gladly seize it.

This is the point where I often pivot to a plea for a lowering of our collective anthropology. We are all self-interested, all biased, all stupid and sinful. We should be more suspicious of our virtue and our rightness, etc., etc. But today, I find myself inclined in a different direction. It’s not that I don’t have a low anthropology. I do, certainly. I think it’s vitally necessary to make sense of ourselves and of the world, and to act with the humility appropriate to our station. But I also think we have lost something vital when it comes the inherent value and worth of each human being. This is evident in how we speak about our enemies, how quickly we leap to hammer their every transgression (real or imagined), how eagerly we shame and mock them, particularly online. Very often we don’t think nearly as highly of one another as we ought to.

I sometimes take pictures of quotes in books when I have nothing to write with. I found a note on my phone today with a snapshot of the following quote. I had no idea where it came from, initially, but I sleuthed out the source as The Guernsey Literary and Potato Peel Pie Society. The quote itself is from the nineteenth century Scottish philosopher Thomas Carlyle and is approvingly cited by one of the characters in the novel:

Does it ever give thee pause, that men used to have a soul—not by hearsay alone, or as a figure of speech; but as a truth that they knew, and acted upon! Verily it was another world then… but yet it is a pity we have lost the tidings of our souls… we shall have to go in search of them again, or worse in all ways shall befall us.

I don’t know the specific context of the quote. On one level, I imagine it is probably a religious argument for the eternal destiny of human beings. We’re not just the accidental products of biology and sociology, little more than a quiver in the dirt destined to eat and breed, make a bit of noise for a few decades and return to the dirt. We have souls, damnit! We are more than that! It’s probably a plea for an exalted view of human uniqueness that many in our day are quite keen to (inconsistently) leave behind.

But today, I’m also wondering what it might be like for us to, as Carlyle alludes to, act upon the idea that we are en-souled creatures. We might cast a thought toward God now and again, certainly, but we might also pay more attention to our fellow en-souled human beings. If we really believed that our neighbours, whether insolent teenagers in MAGA hats or Native American war veterans or Black Hebrew Israelites or whoever else, really had souls that could be shaped toward goodness, truth, beauty, eternity, even… That they weren’t just object lessons in the reinforcement of our worldviews. That they were particular and precious, not just placeholders in some irredeemable category in our brains. How would that change our discourse? Our behaviours? Our judgments? What if we actually believed this? It is indeed a pity that we have lost the tidings of our souls.

I’m not naïve. I know that people have always behaved in beastly ways toward each other, even when most people were convinced that they had a soul. But I’m with Carlyle. I think we shall have to go in search of them again. Bad things are befalling us and we need healthier and more life-giving ways of understanding ourselves and our neighbours if we’re ever going to find a way out of all the ugliness, both of the news of the day and of our reactions to it.

From: Culture, Current Events, Discourse, Ethics, Politics, Race, Technology/Digital Culture
← On Nostalgia
Perhaps We Will Have to Suffer →
13 Comments Post a comment