Tell Me What to Think 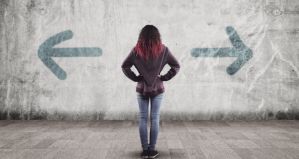 So, a millennial, a baby boomer and a Gen-Xer walk into a bar… —or, a church picnic, as it happens—and a surprising collision and confluence of assumptions and expectations ensues. At least it did on Sunday afternoon. The topic of conversation was critical thinking and its presence/absence in the world and the church. I’m painting in broad strokes in what follows, so I’ll have to ask your forgiveness and patience in advance. With a few stereotypes operating in the background, some surprising and not-so-surprising themes emerged in the conversation.

Boomers tend to be shaped by the freedom and possibility of the post-war years. They are often keen to throw off the shackles of tradition and the rigid strictures of family and communal life that preceded them. Boomers are, perhaps the first generation guided, in broad terms, by the ideal of heroic individual who thinks for him or herself. Personal fulfillment and virtually limitless possibility are guiding ideals. And so, the boomer in our conversation unsurprisingly bemoaned the herd mentality that pervades the church. Most Christians just want to sit there and have someone tell them what to think, they complained. Nobody wants to think for themselves.

Gen-Xers are the generation raised by the boomers and, consequently, the generation that were the beneficiaries (or not) of a more hands-off approach to parenting. They’re perhaps not quite as optimistic or resourceful as the boomers. They’re sometimes called the slackers, the cynical, the disaffected. Some of the idealism of the post-war years has worn off. Unrestrained individual freedom has, unsurprisingly in hindsight, yielded a bit of social dysfunction and instability. Broken families and broken systems are becoming the new norm. Generation X is the generation of grunge music and hip hop. As it happens, I was the Gen-Xer in the aforementioned conversation. And I found myself mouthing predictable responses to the claim that most Christians just want to be told what to think. Well, not always… There are exceptions… And what’s so great about everyone thinking for themselves anyway?

Millennials are, of course, the much-maligned children of the Internet. Stereotypes abound: lazy, entitled, unmotivated, self-righteous slacktivists, always staring at a screen, unable to engage with real human beings in the real world. Like most stereotypes, these don’t exactly emerge out of nowhere, but they don’t nearly tell the whole story, either. Millennials are a generation coming of age in a world of virtually limitless information (with no reliable way to sift through it all), a paralyzing amount of choice (everything from careers to what to binge-watch on Netflix), and the perceived imperative to discover and curate their own identity and project it on to the digital canvas of their watching (and judging) peers. And the millennial in this conversation had a pretty surprising contribution to the conversation. I want someone to tell me what to think.

Wait, what? A young adult telling a few older adults that they want someone to tell them what to think?! That’s not how the conversation is supposed to go! Aren’t the young supposed to chafe at the strictures imposed upon them from above? Aren’t they supposed to be eager to define themselves and their views about the world? Aren’t their lives at this stage of the proceedings supposed to be an embodied protest against what their elders think?

My surprise was compounded by the fact that the millennial who had produced this surprising interjection into the conversation was my eighteen-year-old son. I grinned at him incredulously and said something like, “Well, um, you know I have tried to tell you a few things over the years…” He grinned back. “Yeah, well, you know, I want someone else to tell me what to think.” It has ever been thus with fathers and sons, I suppose. Some truths persist across generations.

My son’s statement has been bouncing around my cranium for the past few days. What initially shocked me has increasingly begun to compute. It made even more sense as I read David Brooks’ most recent column in the New York Times called “And Now, a Word From a Fanatic.” Brooks goes on an imaginative journey inside the mind of an angry young man—the kind of young man that we often read about in the violent headlines of our newspapers, the kind of young man who gravitates to the most extreme ideological and political corners of the internet. The whole article is compelling (and mildly alarming) reading, but a middle passage stood out to me (emphasis added):

To know anything about me you have to understand the chaos at the core of my innermost being. I was raised without coherent moral frameworks. I was raised amid social fragmentation and division, the permanent flux of liquid modernity.

When I was younger my eyes pleaded: Tell me what adulthood and manhood are supposed to look like! All you said was, “You can be anything you want to be!” How does that help? You told me I was special, but the world goes on as if I don’t exist.

I yearn for order. Blunt simplicities. Politics provides the Manichaean binaries I can’t find anywhere else, and so I make everything political. Own the libs! Smash the racist right! A war of pure good and pure evil.

Tell me what to think!

I don’t think Brooks’ article describes all millennials by any stretch. I don’t think it describes my son (I am pleased to imagine that we have in fact attempted to raise him with a coherent moral framework). But I’m also not naïve—I know that my son is coming of age in an extremely complex cultural moment. Brooks is digging around in the soil that is producing an alarming number of angry young men. A lot of angry young people in general, come to think of it, who often take refuge in the world of extreme politics and ideologies because they provide the order and blunt simplicities—the Manichaean binaries of good people and bad people, those who “believe in love” and those who “believe in hate,” of inclusive people and all manner of nefarious —ists and —phobes. Coherent selves require ordered moral frameworks and so we’ll take them where we can get them, even if we have to construct them for ourselves.

There’s an interesting trajectory from the boomers down to the millennials. You could hardly imagine a boomer or even a Gen-Xer saying something like, “I want someone to tell me what to think.” That would be anathema. But maybe this generation is pleading for some guard rails on the superhighway of individualism and freedom. I wonder if the adults in the room will have the courage to listen. I wonder if we can summon the requisite temerity or conviction to do what countless generations before us have taken as a given of parenting and community more broadly—to actually tell a young person what they should think. If we don’t, someone else surely will.