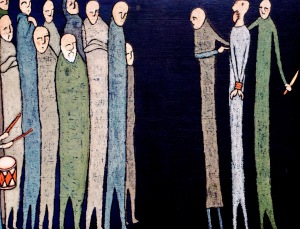 Pilate and Herod were not expecting an execution on that first Good Friday. They didn’t even really want one. This struck me in a new way as I read through Luke’s account of Jesus’ “trial” this morning (Luke 23:1-56). Whatever else is going on in the story of Jesus’ crucifixion (and there is plenty going on, from the person to the political to the spiritual), this is less about Jesus sadly running up against the most powerful men in the land than about powerful men carelessly and cowardly bowing to the will of the mob.

It’s interesting to chart Luke’s chronology. It begins with the assembly dragging Jesus off to Pilate and accusing him of “subverting our nation.” They accuse Jesus of opposing payment of taxes to Caesar and claiming to be a king. Pilate seems barely interested. “Are you the king of the Jews?” he asks. Jesus offers a typically cryptic response (“You have said so”) and this seems like enough conversation for Pilate. “I find no basis for a charge against this man.” We might wonder how Pilate arrived at this conclusion based on the trajectory and brevity of their conversation thus far, but he can hardly wait to be rid of him. Off to Herod Jesus is sent.

Herod is a bit more curious about this Jesus than Pilate. He’s happy to see him. He’s heard about this strange rabbi and the stir he is causing among his people. Herod’s even hoping to see a few parlour tricks. He hoped to see him perform a sign of some sort. Well, Herod doesn’t get the spectacle he wants so he peppers Jesus with a barrage of question, none of which Jesus deigns to answer. This seems to irritate Herod, so decides to create his own show if Jesus won’t give him one. He gets his soldiers to dress Jesus up in a kingly costume and sends him back to Pilate, ridicule and mockery ringing in his ears. This shared bit of fun at Jesus’ expense evidently seems to forge a hitherto unlikely bond of friendship between the Roman governor and the puppet king.

Pilate once again tries to rid himself of this problem and to disperse the agitated crowd. “You brought me this man as one who was inciting the people to rebellion. I have examined him in your presence and have found no basis for your charges against him.” “Even Herod agrees with me,” Pilate says, perhaps hoping the people will acquiesce to his will by appeal to the judgment of one of their own. One can almost sense the exasperation by this point. Pilate has better things to do than deal with some stupid provincial religious squabble.

The story takes now takes a dark turn. “With one voice they cried out.” One voice. No remaining doubt. With one voice, the crowd rejects this pretender Messiah who refused to incite a rebellion against Rome and demands the release of someone who would. Release Barabbas to us! Pilate balks at this but the crowd’s demands grow louder. Crucify him! Crucify him! Pilate offers one last feeble “Why?” but by this point there is only one thing that will placate the mob. Only blood will do for this many dashed hopes, the humiliation of this many misplaced expectations, this much thirst for vengeance. Jesus will die.

And then, perhaps the three saddest words in all of Scripture: “Their shouts prevailed.” The people get the man they want, as Barabbas is released, and get rid of the man they don’t. The failed Messiah marches off to his fate. In the end, Jesus was surrendered to the will of the people. He was released by a Roman governor who was tired of dealing with him and fed up with the mob, and by a Jewish king who got bored with Jesus when he wouldn’t put on a show.

Jesus died at the hands of the Romans, officially. They were the ones that drove in the nails and brandished the spear. But on a more fundamental level, Jesus died because an angry crowd finally saw this Jesus for who he was. They saw that there would be no show—no rebellion against Rome, no great moment of triumph, no reclaiming of any thrones. And who wants a king like that? Who wants a king who won’t even defend himself? Who wants a king who allows himself to be mocked for the amusement of the powerful? Who wants a king hanging on an agonizing cross whispering words of forgiveness for all the wrong people, right to the end? Who wants a king who dies, then or now?

The image above was created by Vancouver artist Troy Terpstra and is taken from Holy Week in the 2019-20 Christian Seasons Calendar.

From: Uncategorized
← The Liturgically Awkward Hope of Resurrection
Far More Can Be Mended →
3 Comments Post a comment