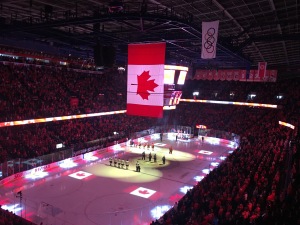 A podcast I was listening to this morning asked the question: “What was the last normal life experience you had before the pandemic lockdown hit?” What stands out in the memory of the days before normal life experiences became few and far between? For the host, it was attending a sporting event—a college basketball game between Virginia and Duke. And indeed, these collective experiences—sports (with fans), concerts, conferences, etc.—are what many feel no small amount of nostalgia for as this difficult year staggers toward its conclusion.

I did a quick check of my own calendar to see how I might answer the question posed on the podcast. March 15 is the day that the pandemic officially began for me if only because that was the first Sunday that we cancelled public worship services and my “normal” changed entirely. The previous Sunday, March 8, I had been in Calgary watching an NHL hockey game with my then eighteen-year-old son. It was the Flames vs. the Vegas Golden Knights (my son’s favourite team). We left immediately after church, threw on our jerseys, and made the two-hour drive north. The Knights won, much to my son’s delight. We had Popeye’s chicken on the way home. We got back around 12:30 am. It was a good day.

Sports have always been a big part of my life. When I was a kid, I imagined that one day I would combine my love of sports with my love of writing and be a sports journalist. Hockey and soccer have been the big two for me, but I would play pretty much anything. My twin brother and I would recreate hockey games on our lawn, complete with commentary, standing for the anthems, and the obligatory violence when two hyper-competitive boys got wound up. I would watch any and every hockey game that I could. When I was a kid that meant two games on Hockey Night in Canada on Saturday nights (I still remember how exciting it was when they introduced doubleheaders!) and, if I was lucky, a mid-week Flames game on the local network. I could scarcely have imagined a world of entire sports networks with games on every day!

In light of the above, it was a very disorienting thing for me when sports went dark at the beginning of the pandemic. March, April, and a good chunk of May were pretty much entirely bereft of live sports. Spring in the sporting calendar tends to be when things get interesting. Playoffs arrive in hockey and basketball. European football is reaching the important stage of the season where league position is being fought for and cup competitions are reaching their knockout stages. All of a sudden it was all gone. People had to do weird things like talk to each other and play games and read books and go for walks. 🙂

The German Bundesliga was the first major sports league to come back in late May. I remember seizing upon these matches like a starving dog on a bone. Live sports!! It was too good to be true. Except for there were no fans and so everything felt (and continues to feel, all these months later), weird. Initially it was just empty cavernous stadiums. Eventually, leagues opportunistically seized upon the available space and covered the lower-level spaces with advertising. The Spanish league pumped in artificial crowd noise and superimposed fake fans on some angles of the live TV feed. This led to the odd spectacle of having “fans” in the main view but seeing an empty stadium from the behind the net camera they use for goal kicks. It all felt (and feels) contrived and a little sad. But despite how fake and forced it all feels, most weekends these days my PVR is loaded full of European football matches from Germany, Spain, France, Turkey, even South America. It’s better than nothing, right?

Of course, some think it’s ridiculous and irresponsible to even have live sports at a time like this. A piece in today’s New York Times excoriates the NFL for plodding stubbornly along with its season in light of how many teams have had COVID outbreaks and the effects this could be having in the communities in which they play. It’s all about the money—we all know this. TV revenue is massive and so the show must go on. The rich must be made richer. I suppose the most principled fans would boycott watching live sports in protest of the risks they are taking and the misplaced priorities they represent. But we are so desperately in need of distractions by this point, aren’t we? Who’s going to begrudge the home-bound sports fan this tiny sliver of fake normalcy in the midst of everything else we’re dealing with? 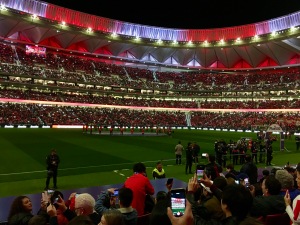 Just over a year ago, some good friends and I went on a mini-European soccer tour. We had been talking about the possibility for years, but money, but kids, but jobs, but timing… It never seemed to really work. Eventually we just decided to bite the bullet and go. Are we ever thankful now that we went when we did! Who knows if or when a trip like that might be possible these days? We attended games in Madrid and Frankfurt which were each memorable in their own way. The walks to and from the stadium, the fans singing and chanting, the colour and pageantry, the euphoria when a goal is scored, the feeling of being a part of a shared “something” with total strangers. It was unforgettable.

The trip was oriented around sports and the matches were each memorable in their own ways. But what was more memorable, obviously, was the experience of sharing it with others. Sitting in the city squares with friends, nowhere urgent to be and nothing pressing to do besides take it all in. Walking the streets, stopping at pubs, buying bratwurst on a walk through the forest to the stadium in Frankfurt, trying to get an Uber from the outskirts of Madrid, collapsing into bed with the sound of the crowd still ringing in your ear. Listening to your son’s ear splitting EDM music on a wintry late-night drive home from Calgary after a hockey game. It’s all about the sports. Or, it’s not at all about the sports. Or, more likely, it’s something in between.

The top picture above was taken in Calgary at the Flames vs. Knights game on March 8. The second one was taken at the Wanda Metropolitano in Madrid in autumn, 2019.