A Power We Should Not Have and That Cannot Make Us Whole. 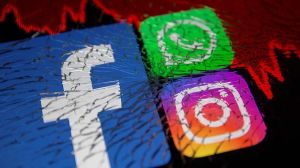 Mark Zuckerberg’s week hasn’t gotten off to a particularly great start. First, Facebook and its apps (What’s App, Messenger, and Instagram, most notably) were offline for around five hours on Monday. Which, when you’ve deliberately manufactured addiction your products customers have come to depend on you is, like, forever. And then, today, former Facebook data scientist Frances Haugen testified before US Congress that the social network knowingly “harms children and fuels polarization” because it “elevates profits over safety.” Huh, who would have thought? Not the best few days for the brand, you could say.

Facebook will almost certainly recover. Zuckerberg may have had an expensive few days (economically and optically), but I don’t expect he’ll be struggling to put bread on the table any time soon. Congress will likely bat around a handful of mostly cosmetic restrictions, but at the end of the day, a third of the human population will continue to stampede on to Zuckerberg’s platforms for two very simple reasons. First, there is gobs of money to be made. Facebook and its apps are so thoroughly embedded in our economic lives right now that it is virtually unthinkable that any government would do anything to radically curtail this. Aside from the big money to be made at the top of the pile by those who mine our data to sell us stuff, so many businesses of all sizes rely on social media to advertise, to connect with customers, to function. Nobody’s going to drastically restrict the reach of these social media giants if it threatens to jeopardize the bottom line.

The second reason is that there is this thing called human nature. As human beings, we tend to be—you may have noticed?—rather enamoured with ourselves. Facebook and Instagram give us these vast platforms from which to broadcast our wonderfully unique selves, with all their opinions, meticulously curated images, causes, outrages, and idiosyncrasies. Social media turns us each into our own little personal broadcasting networks. And the content is almost always, in small ways and big ways, in subtle ways and explicit ways, us. We’re not likely to give this up any time soon, no matter how terrible it is for our mental health, our children, our democracy, our discourse, our… whatever. You may also have noticed that human beings do not reliably pursue what is good for us? And so, yes, we will continue to nibble around the edges of the system with our little complaints and suggested tweaks. But it’s hard to imagine a radical overhaul of any enterprise that is so devoted to selling us our very selves (or versions thereof). We’re really big fans of ourselves.

To be clear, I think that Frances Haugen is right. I think Facebook (and all that it has spawned or swallowed up) is doing real harm to our kids (young and old). This worries me terribly. I think it is toxifying and polarizing our discourse. I think it probably is a genuine threat to democracy itself (these are among the reasons that I got off Facebook last year). I just frankly don’t see how it will ever be reined in. Social media preys upon one of our deepest, most intractable human needs. To be noticed. To stand out. To matter. To belong. To be “liked.” To be seen. It is these features of our humanity that are the engine driving the social media train. This is why Zuckerberg’s billions are probably safe. He has figured out a way to monetize these irreducibly human desires for love and connection, to crave the fleeting and paper-thin notoriety that comes from getting attention online.

I’ll give the last word(s) to Chris Hayes who recently wrote a trenchant and deeply sobering piece for The New Yorker called “On the Internet, We’re Always Famous.” In it, he talks about how social media trains us to pant after the attention and approval of people we don’t know, and about how dangerous this is for human well-being:

In the modern era, it’s a cliché: the rock star, comedian, or starlet who succumbs to addiction, alienation, depression, and self-destruction under the glare of the spotlight. Being known by strangers, and, even more dangerously, seeking their approval, is an existential trap. And right now, the condition of contemporary life is to shepherd entire generations into this spiritual quicksand.

I’ve come to believe that, in the Internet age, the psychologically destabilizing experience of fame is coming for everyone. Everyone is losing their minds online because the combination of mass fame and mass surveillance increasingly channels our most basic impulses—toward loving and being loved, caring for and being cared for, getting the people we know to laugh at our jokes—into the project of impressing strangers, a project that cannot, by definition, sate our desires but feels close enough to real human connection that we cannot but pursue it in ever more compulsive ways.

So here we are… the constant flitting words and images of strangers entering our sensory system, offering our poor desiring beings an endless temptation—a power we should not have and that cannot make us whole.

From: Culture, Current Events, Discourse, Ethics, Politics, Quotes, Technology/Digital Culture
← “Would You Write Straight with My Crooked Lines?”
On Deciding in Advance →
9 Comments Post a comment