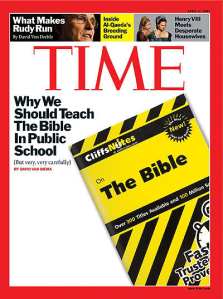 Well here’s a story that’s bound to generate a bit of controversy especially given our current political climate. I saw this on a newsstand as I was waiting for Naomi and the kids at the airport last week, and I had to do a double-take to make sure I saw the headline correctly. I’m not sure it’s exactly the kind of thing some in America are looking for when they seek to “get the bible back in the classroom,” but it’s a somewhat surprising argument to find in a major news magazine nonetheless. The following quote offers a summary explanation of sorts as to why such a “step back” might be a good thing:

To some, this idea seems retrograde. Citing a series of Supreme Court decisions culminating in 1963’s Abington Township School District v. Schempp, which removed prayer and devotion from the classroom, the skeptics ask whether it is safe to bring back the source of all that sectarianism. But a new, post-Schempp coalition insists it is essential to do so. It argues that teaching the Bible in schools–as an object of study, not God’s received word–is eminently constitutional. The Bible so pervades Western culture, it says, that it’s hard to call anyone educated who hasn’t at least given thought to its key passages. Finally, it claims that the current civic climate makes it a “now more than ever” proposition. Says Stephen Prothero, chair of the Boston University religion department, whose new book, Religious Literacy (Harper SanFrancisco), presents a compelling argument for Bible-literacy courses: “In the late ’70s, [students] knew nothing about religion, and it didn’t matter. But then religion rushed into the public square. What purpose could it possibly serve for citizens to be ignorant of all that?” The “new consensus” for secular Bible study argues that knowledge of it is essential to being a full-fledged, well-rounded citizen.

In general I think this is a pretty good idea, although I don’t doubt that it would present endless opportunities for politicization and manipulation. In principle, I think that every educated person, regardless of their evaluation of it as a sacred text, should have some rudimentary understanding of how the bible has exerted a formative influence upon Western culture. In practice, I wonder if it would be possible to do so in such a way that would keep everyone happy in a modern pluralistic society. It will be interesting to see how this works itself out.

UPDATE: Here’s an interesting article on the politics of magazine cover decision making, specifically with respect to this issue (Thanks Becky).