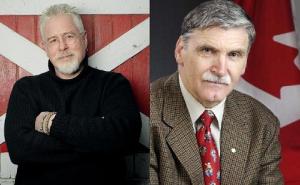 This week a friend sent me a link to an event taking place just down the road in Victoria this fall. The University of Victoria is hosting an evening with two prominent Canadians—singer/songwriter Bruce Cockburn and the former head of UNAMIR (the United Nations peace-keeping mission to Rwanda), Lieutenant-General Romeo Dallaire. The proceeds from this event will be going to help fund the Child Soldiers Initiative in Africa, an international research and intervention effort focused on the eradication of the use of child soldiers. The price-tag for this event might prove prohibitive ($81.50), but I’m hoping to find a way to get down there for this.

The email brought me back to Dallaire’s Shake Hands with the Devil which I read a few years back. It was by far the most difficult book I have ever read in my life. At several points I simply had to shut the book, put my head down, and weep at the horrific brutality that human beings are capable of. Dallaire’s courage and commitment in the face of truly unspeakable evil and the shameful neglect of the international community were truly remarkable, but the book really shook me up.

I didn’t think I’d ever read another book like that again, but over the last couple of weeks I’ve been walking through the same story through the eyes of one of the doctors on the ground during the crisis. James Orbinski’s An Imperfect Offering is proving as difficult and heartbreaking a read as Dallaire’s book, and is leaving me with similar feelings of helplessness and virtual despair at what we are capable of as a species.

While most of us read books like this and then, eventually, get on with our lives, Orbinski at least did something. He was there, he treated the wounded, he helped as he was able. Yet he, too, had moments where it all just seemed beyond comprehension. At the end of one chapter, after recounting the horrifying story of a little girl who watched her parents being murdered in front of her eyes, he writes:

I think that figures like Orbinski and Dallaire are compelling and demand our careful attention because they highlight the frightful mystery of human nature. Both men know that human beings are capable of behaviour so evil that it can only be attributed to a malevolent force that goes beyond what nature alone can produce; but they also know—and demonstrate by their actions—that these same human beings can rise to heights of love, service, self-sacrifice, and heroism that seem to border on the divine. We have the capacity to choose.

Sometimes I think human beings are undeserving of the terrible freedom God has given us. Too many innocent people suffer too frightfully as a result of the decisions of relatively few. Yet while reading Dallaire and Orbinski almost makes me despair of humanity, when I look at how they, and many others, exercise their freedom to choose, I am hopeful again. Evil may be uniquely human but so is the awe-inspiring goodness, courage, and selflessness of these men. We, alone, can choose how we will be human.