Prayer: You Place a Reservoir Within My Heart 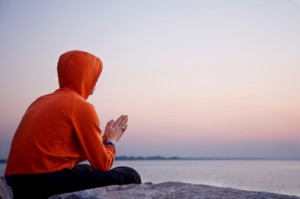 Perhaps surprisingly, given my occupation and the fact that one of my main (and most rewarding) tasks on any given Sunday is leading our congregation in prayer, I often find prayer difficult. The reasons for this vary. Sometimes I am paralyzed by the relative insignificance of my own needs when compared by the suffering others are facing (this week has been an especially difficult one for prayer, given the situation in Haiti). Sometimes I don’t know what to pray for. Sometimes I don’t know what prayer accomplishes—in my own life and character and for those I pray for. Sometimes I am simply lazy and undisciplined. Sometimes the silence of heaven wearies me.

Growing up in a Mennonite Brethren church, the form of prayer I was most familiar with was the extemporaneous variety. Often these would take the form of long, rambling, stream of consciousness-type prayers where whatever we happened to be concerned about at the moment was brought before God. These are good, and they certainly have their place, but sometimes, we (I) substituted sincerity for thoughtfulness and theological consistency. We were not much for using written prayers—at least not those that weren’t part of Scripture.

As I progressed on the journey, I came to become increasingly drawn to some of the prayers used in the more liturgical traditions. I began to use books like the Divine Hours series by Phyllis Tickle or the Book of Common Prayer or Celtic Daily Prayer. These resources gave me a language and a form to fall back on when I found prayer difficult, when my own words were lacking. They were (and are) a guard against the selfishness that so often creeps into my prayers. I came to draw strength and courage and hope from the words of others. I have come to deeply appreciate these prayers, and use them often both privately and publicly.

I have decided to include a weekly prayer on the sidebar of this blog. Often these will come from The Divine Hours but I may mix it up from time to time.  Hopefully these will be of some use to you as you live and love and hope and pray as well.  I share them with you not because they are “super prayers” from “super Christians” or anything like that, but because we are all pilgrims on the same journey and because all of us, from time to time, need to lean on the faith and the words of others.

I conclude with one of the prayers I prayed this morning. Ultimately, whatever frustrations and objections to prayer happen to be plaguing me at the moment, I do see prayer as a response to the reservoir that God has placed within my heart—within all of our hearts. I pray because the reservoir is there and because it demands a response.  I pray because I cannot not pray:

You place my feet upon a larger place, Lord,
You give my hands a greater task for You.
You set my eyes upon the far horizon
and in my heart I know Your word is true.

You place a reservoir within my heart, Lord,
that all my tears
would come from a different place:
that all my ways would minister Your Grace
to those who long
to see Your face.