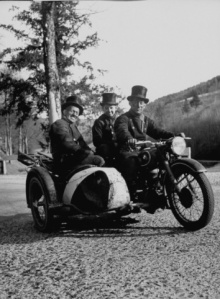 Among my discoveries on two long days spent on my recently acquired motorcycle was that I am now part of a club. I’m not sure if it qualifies as an “elite” club yet or not, but we have our own equivalent of a handshake and everything. Every time you pass a motorcyclist on the highway you will be greeted by “the wave” from your fellow “two-wheeler.” Well, most of the time. More on that later.

Actually, the “discovery” of belonging to the club was more of a rediscovery. I knew a bit about “the club” and “the wave” from my university days when I bought a piece of junk old bike to ride to school and back (mostly because I was cheap and motorcycle parking was free). Most of my rides back then were half an hour or less, though, so while I was on the receiving end of “the wave” more than a few times, I didn’t have an opportunity to experience the subtleties and variations that one observes on a longer trip.

For starters, there is a wide degree of variation in how the wave is practiced. Sometimes it will be two fingers barely extended off the handle bar. I call this the guarded wave or the “I’m quite a bit cooler than pretty much everyone else on the planet, but I’ll throw you a bone” wave. Not very enthusiastic or effusive, but appreciated nonetheless. More common is the “low glider”—the entire arm extended down and out from the handlebar. Kind of like a tag as you pass by. Still pretty cool, but a bit more emotive. Then there is the salute off the side of the helmet. I saw 2-3 of those yesterday. I tried it once, but it takes a lot of effort to lift your hand up that high when you’re traveling at highway speed, not to mention extending it out into the wind. I decided that much peril lay down the salute path, appreciative as I was of receiving it. Finally, we have the “happy flapper.” Again, a bit more rare, but this is the over-eager, possibly even a bit desperate guy (it’s always a male) who you see coming half a kilometer away. He’s probably been on the road a long time and he’s evidently lonely, given the frantic waving. You feel kind of like long-lost lovers or something. Weird. A bit creepy, even. But still, great to be part of the club.

I have also gleaned, in overheard conversations and sideways glances at gas stations and rest stops across Western Canada, that our club has a hierarchy. At the top of the pile are the guys with Harleys or Harley-looking bikes. The rider sits back on the bike in a kind of lounge position surveying his kingdom. Long handlebars are a plus, as is chrome. Lots of chrome. And leather. Again, the more the better. And hair—face, chest, head, wherever. Again, the more, the… Well, you know.

These guys wear glorified salad bowls for helmets, a sign of their obvious disdain for the indignity of being mandated to wear one at all. They sometimes wear bandanas over their mouths to keep the bugs out. A helmet with a face shield would also achieve this end, but those are for wimps. So would a wind screen, for that matter, but these are also for wimps. Also, it would hinder their long hair from blowing gloriously in the wind. Here, the less clothes and protection the better. These bikes are for the manliest of men. If it were legal, you get the sense that they would fly down the highway with nothing but leather chaps and a bandana. They are the patriarchs of our club. We admire them, but we’re also a little afraid of them.

Then there are the crotch rockets. These are the sport bikes that go like three million kilometers an hour where the rider sits way forward, almost on top of the tank for, uh, aerodynamic purposes? Yes, let’s go with that. These guys are outfitted in full body armour. Tinted visors, full-face shields, jackets, boots, gloves, all heavily padded. If you’re going to skidding across the pavement at high rates of speed, it’s good to have protection. These tend to be driven by twenty-something guys. They’re the bad boys of the club. It’s all about speed, speed, speed.

Next, we have the touring bikes. These are the Cadillacs of the club. Seats with arm rests and high backs for lumbar support, cup holders, massive fairings and windshields, furry seat warmers, elaborate communication systems… Anything and everything imaginable for maximum comfort. I was beside one of these guys at a traffic light yesterday and listened to his radio for a while! (A radio on a bike?!) These tend to be ridden by, well, older people. It’s our club’s equivalent of a luxury RV lumbering down the highway. Not patriarchs, exactly. More like the grandpas.

Finally, we have what I will, for lack of a better term, the “hippy bikes.” These are smaller bikes, usually pretty beat up, occasionally even dirt bikes with knobby tires. The riding gear is old and well-worn. Sometimes there will be crudely attached metal boxes on the rear sides for storage. Style is of no consequence here. It is all about cheap transport and/or studied indifference to the values/norms of the rest of the club. The uglier, dirtier, and less powerful the better! We’re not quite sure what to do with these members of the club, but we still wave at them.

There are others, too, of course. There are Euro-bikes (rich mid-life crisis types) and three-wheelers (we still wave at them, even though it’s sort of embarrassing that they still need training wheels) and bikes with side cars (I always expect to see Harrison Ford and Sean Connery in these units), but this more or less covers the bases. Besides, this post is getting very long…

This hierarchy maps more or less consistently on to the taxonomy of wavers described above. The patriarchs wave the least frequently and the least enthusiastically. They’re better and more manly than you, and they know it. They might give you a guarded wave or they might just laconically spit a bug out of their teeth in your general direction. You’ll just take what you get and be happy with it, if you know what’s good for you! The crotch rockets and touring bikes tend to be the low-gliders. The hippies are the most unpredictable. You could get anything from a disdainful “no wave” to a happy flapper or even a salute! It’s anyone’s guess. You have to be ready for anything. It’s crazy out there.

For my part, I wave at anyone and everyone. Sometimes I even forget myself and wave at ordinary cars—at four wheelers, can you imagine?! I usually employ the low glider, but I’ve been known to experience a rush of blood to the head and resort to more expressive gestures. I’m just glad to be a part of the club.

From: Random Musings, The Lighter Side, Travel
← Two Silences
Belief is a Something (And You’d Better Get it Right!) →
8 Comments Post a comment