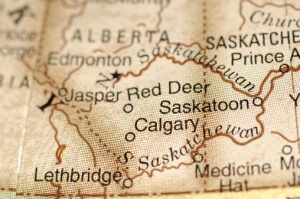 Part of this past weekend was spent in Medicine Hat, AB where my son had a basketball tournament. Medicine Hat would probably not be thought by many to be a remarkable place. The city’s main claim to fame is probably the world’s largest teepee (the “Saamis” teepee, the Blackfoot word for the eagle feather headdress which was translated “Medicine Hat”) that sits just off the Trans-Canada highway near a historical buffalo jump. But aside from that, Medicine Hat is a lot like so many other windswept prairie towns. There are pockets of beauty, to be sure, but it’s mostly brown, flat, nondescript. There is the now familiar exodus of business and commerce from the downtown area, to the outskirts of town where there is plenty of cheap land for the innumerable fast-food joints and big box stores that pop with alarming speed and regularity, and the vast oceans of asphalt parking lots for the jacked up pick up trucks, SUVs and mini vans that rumble down its streets. Medicine Hat is an ordinary prairie town. Somewhere most people are passing through on their way to somewhere else. Calgary, Vancouver, Winnipeg, wherever. Forgettable.

But Medicine Hat is not forgettable for me.  It was into the Medicine Hat Regional Hospital that my wife and I walked with much excitement and trepidation twelve and a half years ago to meet our newborn twins. The news that we had been picked by a birth mother had come a grand total of two days prior. We were told we would have months to prepare, but there were extenuating circumstances… and things had happened late… and the babies were born early… and you need to come now! And so, we scrambled together a few things, hopped into our little Honda Civic full of fear and frenzy, and made the ninety-minute drive east down the #3 highway.

I remember little of what we talked about on that drive. The subject of names came up, I think. We probably talked about practical details like where we were going to find two cribs, two high chairs, etc. (we had been expecting a child not children). We probably talked about our hopes and fears for the future. We probably rejoiced in the fact that after all the paperwork and invasive questions and home studies and interviews and false alarms, it was finally happening! But mostly I just remember a knot in my stomach like I had never experienced before. I remember being very, very afraid. I remember thinking that I was in no way prepared for what these next days and weeks and months and years would hold.

You don’t. You can’t. There is no preparing for the shattering, holy, terrifying, miraculous appearance of gifts like this.

And so, twelve and half years later, my son and I drive through this utterly ordinary, forever extraordinary town. Medicine Hat. This little five-pound body with the dark eyes and the smoothest skin I have ever felt has somehow morphed into an astonishing creature that looks down at me, that lumbers around the basketball court, all arms and legs and pre-teen gangly, awkward, beautiful clumsiness. Inexplicably, this little boy with the easy smile and the voracious appetite and the indomitable will, this little boy whose story began in Medicine Hat, is growing up.

We drive together through the streets of Medicine Hat, my son and I. He looks absently around at the big box stores, the fast food joints, the brown, windswept prairie ordinariness. I wonder what he is thinking. Eventually, he speaks: “So, Medicine Hat is kind of like my hometown, right? This is where I was born?” “Yes,” I say, my heart embarrassingly feeling like it is about to explode. “This is where we first met you and your sister. This is where it all began.”