I Am Not a Rational Human

The day started promisingly enough. I opened my eyes and the sun was trickling through the blinds. I remembered that it was Monday, and that Monday was my day off, and that I like Mondays. I thought about a leisurely morning spent in the front porch sun with a good book and a cup of coffee. I sighed contentedly. Yes, very promising indeed. And then I got out of bed.

Over breakfast, my wife, clearly oblivious to my plans for the morning, intrusively (and rather insensitively, in my opinion) thrust our vehicle registration renewal forms in my general direction. “Can you please deal with these today?” she asked. “Make sure that you bring along…” My shalom was being destroyed and it was not even 8 am. “Yeah, sure” I mumbled unenthusiastically. “Ah well,” I reassured myself, “that shouldn’t take too long.” I dropped the kids off for school, put the dog on the leash and walked over to the registry office.

Here, I was greeted by a lineup. I hate lineups. I hate lineups even more when my dog is tied to a pole outside barking his foul head off. And I especially hate lineups when the terminus of said lineup involves the forking over of obscene amounts of money to a smiley bureaucrat. But eventually, I reached the front. I handed over my documents, hoping to make the process as quick as possible. “Insurance, please” said the smiley bureaucrat. Right, um, what? I stupidly asked. “Your proof of insurance, sir.” I groaned inwardly, thinking “I wonder if that part of the conversation with my wife this morning—the part where I zoned out and started to thinking about the diminishing returns of my shalom—was the part where she said, ‘make sure you get the insurance papers out of the vehicles first.’” I looked at the lineup I had just bravely conquered. I listened to my dumb dog whining outside the door. I sighed and trudged home to collect my insurance papers.

Later that morning I returned—a good deal grouchier than my first visit, it should be noted—and plunked down my hundreds of dollars. By this time I was thinking that I needed to do something to redeem myself for the inattentiveness that had cost me precious time and Monday shalom. I decided that I would wash our vehicles. I drove over to the car wash and peacefully exulted in the transformation of my 1997 Jetta from a grimy, dusty, dirt-streaked eyesore to a rust-flecked, off white, beat up clunker. Upon the completion of this metamorphosis, I got into the car and turned the key. Nothing. Inexplicably, it wouldn’t start. I tried again. And again. And again. Nothing.

At this point, I did what I thought the manly thing to do would be and opened the hood. It was just as I expected. Still full of “mechanical stuff I don’t understand.” I went back and fruitlessly tried the key again. I pounded the steering wheel, slammed the car into neutral and pushed it out on to the street to consider my options. I decided to do what I usually do when I bump up against the limits of my (practically non-existent) mechanical know-how, and called my dad. My dad happens to be pretty much omni-competent (the apple didn’t even fall in the same area code as the tree, in this case) and I figured if nothing else he could come and help me push the car home.

And then—wonder of wonders!—while I was talking to my dad on the phone, the car just started! Hooray! Monday morning shalom was back on the agenda! I began to inch cautiously forward, careful to keep the car running for the five blocks it would take to get home, thanking my dad for the strange magic that his voice had apparently performed upon my car.

And that’s when I saw the police lights in my rearview mirror. And with them, the last traces of hope for my Monday.

I dejectedly rehearsed the options in my mind. I wasn’t wearing my seatbelt, so it could have been that. I was talking on my cell phone, so there was that. Had I also rolled through the stop sign? I braced myself for a frighteningly huge ticket as the police officer sidled up to my door. “Do you know why I pulled you over?” he asked. Why must they always ask that? Are they trying to see how guilty we think we are? Are they trying to squeeze a confession out? I thought about answering, “Oh, do I have a tail light out, officer?” or “Because you were impressed by how smoothly I shifted from first into second?” or “Did you need someone to talk to at the coffee shop this morning?” I decided against those options, and meekly offered, “seatbelt?”

“You were talking on your phone,” he said humourlessly. “Oh, right,” I replied. “That.” I passed over my freshly purchased vehicle registration along with my driver’s license and submitted myself to whatever would come. A few minutes later, he ambled back. “Well,” he said, “I didn’t see you with your seatbelt off, so I can’t get you for that.” Waves of relief began to lap gently against the shores of my weary conscience. He went on, “If I had seen your seat belt off, I could have given you a ticket for that which would have been relatively cheap.” The waves of relief began to feel less gentle. “But because I didn’t see your seatbelt off, I’ll have to get you for distracted driving. Which is $170.” He smiled again. I didn’t even have the energy to be annoyed. 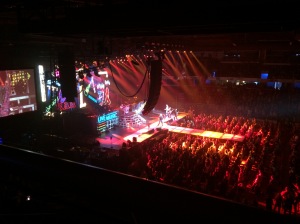 So, I’m sitting here at the kitchen counter, marinating in my own irrationality and staring at this angry yellow piece of paper with “Violation” across the top of it. Beside it, there are ticket stubs from a Def Leppard concert that I went to with my son on Saturday night. Yes, that’s right. Def Leppard. As in, the fifty-something remnants of the 1980’s hair metal warriors that I grew up listening to along with Mötley Crüe, Guns N’ Roses, Metallica, and Van Halen. Inexplicably, my thirteen-year-old son had been pestering me to go to this concert for months. I have no idea why he doesn’t like better or at least more recent music than this, but he’s an aspiring rocker and he loves it loud and proud. I had been trying to dissuade him for as long as he had been asking. “Def Leppard is old… And they probably won’t be very good… and the tickets are so expensive! And they’re old!” But he wouldn’t relent.  The heart wants what it wants…

Last Wednesday, my wife sent me an abrupt text message: “You need to go online and find some tickets for this concert. Who cares if they’re terrible? He’ll love it. And he’ll always remember that his dad took him to a Def Leppard concert when he was thirteen.” What could I say? She was right. She always is.

So, I found some (expensive) tickets online and on Saturday night my son and I found ourselves rocking out to “Pour Some Sugar on Me” with several thousand middle-aged rockers who had squeezed themselves into well-worn leather vests and mini-skirts. And you know what? Def Leppard wasn’t even half bad. My admittedly low expectations were pleasantly exceeded. But even more importantly, my son was wide-eyed throughout. And it wasn’t just because he heard the woman behind us (loudly) musing about whether or not she should throw her underwear at the lead singer or because of the salty language he heard being tossed around by the very drunk guys that almost stumbled into him on the way out. It was because he was at a rock and roll show with crunching guitars and light shows and drums that made his chest shake. “It was because they were “totally awesome!”

I am not a rational human. Usually, this annoys me to no end. But sometimes, it’s ok.

The image above was taken by my son on Saturday night.  He had a smile on his face when he took it, as do I, as I put the finishing touches on this post with “Hysteria” screaming through my headphones.

From: Conversations with Kids, Fatherhood, Music, Random Musings, The Lighter Side
← This World Is (Not) My Home
What Do You Want Me to Do For You?” →
11 Comments Post a comment