“Something is Now Supposed to Grow Together” 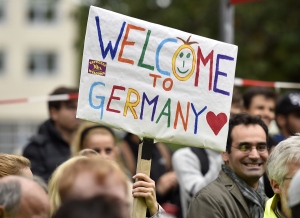 I’ve been paying attention to Germany lately. And not just because my wife happens to be there visiting dear friends of ours who live in Bavaria (my daily act of spiritual discipline this week has been to attempt to suppress the feelings of jealousy that regularly flare up as I think about her wandering the streets of Munich while I clean the cat’s litter box and make dinner…). I’m also paying attention to Germany because this is the nation that was and remains a focal point of the refugee crisis that took a dramatic turn in early September with the discovery of Alan Kurdi’s body on a Turkish beach.

Since then, we’ve observed this wave of human beings from Syria, Iraq, Afghanistan, and elsewhere moving steadily into Europe looking for safety and a better future. More often than not, their destination was and remains Germany. And in those early days of the refugee crisis that now dominates the daily news, Germany responded in incredible ways. Chancellor Angela Merkel threw open the doors of her nation, saying that all who sought asylum would be welcomed. The numbers were  astonishing. There was talk of anywhere between eight hundred thousand and a million people being absorbed into German cities and towns. There were inspirational scenes of crowds of Germans welcoming Syrian refugees at train stations in Munich, Berlin, Stuttgart… Germany was a global symbol of hospitality, of embracing the stranger. Germany was the bar that other nations were failing to rise to.

Here in Canada, Germany’s generosity was compared to the meager trickle of refugees that were allowed to dribble in to our nation due to what many consider to be our government’s unnecessarily restrictive policies. Why can’t Canada be more like Germany? I often heard in conversations about our project to bring Syrian refugees to our city. I heard it again just last week at a forum that I was invited to speak at. I recall saying something along the lines of what I often say when asked about Canada in comparison to Germany. Well, I don’t know about the numbers that Germany is considering. But I’m pretty sure that Canada can do more. A lot more.

I remain convinced that this is true. Canada can and must do more. I remain convinced that Germany acted admirably in those early days. But even at the time I wondered how this would all play out. As the breathless affirmation of Merkel and of Germany poured forth in corners of social media, I wondered how all of this would sound a few months or years down the line. I wondered what absorbing hundreds of thousands of people from cultures that look and sound and feel nothing like twenty-first century Germany would look like. I wondered if German people—good, compassionate, decent German people—would lose patience with their government’s decision, and begin to turn on the refugees. Rhetoric tends to race ahead of reality, particularly when the rhetoric is as high-minded as it was when people are responding and reacting to human suffering on a staggering scale.

And now, predictably, it seems that some of these realities are starting to materialize. A recent article in The Economist paints a sobering picture of German public opinion turning against Merkel, of communities struggling to integrate refugees or even house them as winter approaches, of classrooms being unable to cope with children who can’t speak the language, of clashes between competing groups at refugee camps, of asylum seekers struggling to fit into the German social and economic reality. These are massive challenges that will require enormous energies to adequately address going forward.

We can’t ignore what’s going on in Germany—particularly those of us who have been strong advocates of welcoming the stranger into our own nation and communities. I know that I have been among those who have appealed to high-minded ideals in advocating a response that is compassionate and wise. I know many will point to stories like the one in The Economist and say, “You see, we told you! Look at what’s happening over there! ‘Those people’ just don’t integrate well!” I know that many will point to Germany as an example of what we don’t want to happen here in Canada.

And so, how do we respond? What do we say? What do I say? I have poured forth so many words in this space about the refugee crisis and what it asks of us, as human beings, as Canadians, as Christians. Is it all just a bunch of idealistic noise? Some undoubtedly think so (several hundred commenters on a recent post, at the very least). But I remain hopeful. I think that our local group has a good plan of “families welcoming families” and are determined to walk with the people that arrive in our city far beyond the one-year requirement. We have past success stories in our churches and our city to point to and learn from. We know this can work.

But we also know that it’s not easy, and that romanticizing the process and drenching it with dewy-eyed rhetoric isn’t helpful either. We live in a point-and-click-activism culture where our compassion and good will is easily yanked around by the latest deliverances of social media. Germany reminds us that this is a long road that we have decided to walk. And it will likely be a hard one. Our situation in Canada bears little resemblance to the one faced by Germany, but wherever we are and however we are trying to respond, unless our efforts are animated by deep and settled convictions about what is possible and what it might require, they will probably not be successful.

German president Joachim Gauck has said that the present refugee crisis is the biggest challenge that Germany has faced since reunification in 1990. In a fascinating statement from the article referred to above, he says:

Just like in 1990 we’re all facing a challenge that will occupy us for generations. But unlike back then, something is now supposed to grow together that has not belonged together until now.”

I am obviously thinking far beyond the German context when I say that I am convinced that there are possibilities contained in those two little words, “until now.” How could I not? I am a follower of Jesus, after all—a follower of the one who brought together Jew and Gentile, who took hostile peoples and—impossibly!—grafted them into the same branch. I am a follower of the one who looked at things that did not “belong together” and made them grow into something beautiful and new. How could I not believe that similar things are possible for those who follow in his steps?