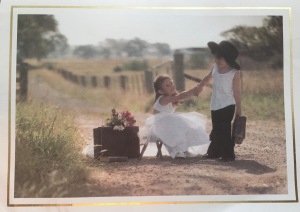 On the shelf beside my desk in my study sits a card with scuffed up edges and faded colours. It’s a rather plain and unassuming, artifact, on the whole. On the front, is a picture of two little kids dressed up as if on their wedding day on a dusty dirt road. The little boy seems to be barely suppressing an awkward grin as he tries to drag the girl along with him wherever he’s going. The little girl has a smile that could melt your heart or save the world, but it looks like she’s not entirely convinced about the entire enterprise. Inside the card, it says something to the effect of Naomi Jade Horii and Ryan Courtney Dueck (yes, Courtney…thanks mom and dad), together with their parents, invite you to a wedding… to share in their joy, on November 25…

Today marks the twenty-first November 25 since. I looked at the card this morning and a flood of clichés and wistful reflections came rushing in. Oh man, we were barely older than those kids on the front of our wedding invitations… We had no idea what we were doing, no clue what we were promising each other… We were so naïve… I don’t feel old enough to have been married for twenty-one years… I wonder what it would be like to be young again… I wish we would have thrown a better party for people on November 25, 1995… Ah, nostalgia. How have you been, old friend? It’s good to see you again.

It will come as no surprise to those who know me well that I’m kind of uniquely terrible at “special days.” Birthdays matter very little to me, and I forget/ignore them with cheerful, if culpable regularity. Days like Valentine’s Day or St. Patrick’s Day or any of the myriad special awareness days (November 19 was, apparently, “World Toilet Day”; two days later, it was “World Television Day”) that seem to be spreading like a disease matter even less. And don’t even get me started on the stupidity of days like Black Friday or Halloween. We are, evidently, a damnably bored species.

But anniversaries, it seems to me, are a different category, if only because these days honour a choice and a commitment. I did very little to warrant congratulations for being born, although I suppose remaining alive from birthday to birthday represents a small sort of achievement. But fidelity? Or even just gritting your teeth and hanging on for dear life, in a cultural context that trains us daily to think of relationships as more or less disposable? That’s worth honouring and celebrating. At least so it seems to me.

There’s a line in Francis Spufford’s marvelous book Unapologetic where he compares our relationship with God to human relationships like marriage. If we do either well, he says, we come to learn “the slow rewards of fidelity.” I love that line. The slow rewards of fidelity. How desperately we need to learn that some of the best rewards in life can only be attained slowly, through patience, through trial and error, through unfashionable fidelity. How desperately we need to be reminded that relationships of the best sorts cannot be the servants of our many and varied emotional fluctuations.

So what are some of these slow rewards of fidelity that I have acquired over twenty-one years of marriage? Well, there are many, of course, and most would probably fall into the category of “not for public consumption.” But the overarching reward that stands over all of the others would be that of actually learning—slowly, haltingly, blissfully, painfully, contentedly—what the word “love” actually means.

When I was twenty, I thought I knew what love was (in the way that only young lovers do), but I think more often than not I had much smaller words operating where love should have been. Words like “obsession” and “infatuation” and “desire.” These words aren’t terrible. They’re decent enough places to start, I suppose, and they can provide a launching pad for love to be grown and formed. But they’re mostly pretty selfish words—words that require far less of you than real love.

Desire and infatuation require no special skill. I mastered both of those quite easily in my teens and twenties. Love is a much longer, slower road. Love, like the picture on our wedding invitation, will take your hand and beckon you on a journey. And you’ll think you know who it is that’s taking your hand and where you’re going, but you don’t. Not really. The word (and the road) is so much bigger and harder and stronger and more full of grace and beauty and pain and longing than you ever could have even dreamed when you first reached out for it. Which is as it should be. Because love is the kind of thing that needs to be learned slowly.

It’s been twenty one November twenty fifths since a beautiful girl reached out her hand and a mostly-clueless boy eagerly grabbed it and hung on for dear life. Twenty-one years of learning and loving and growing and giving and forgiving and stumbling and smiling and starting over again. Twenty one years of learning the slow rewards of fidelity that only time can teach.

We’ve made a good start, haven’t we, my dear? We’re well on our way, well on love’s way.