On the Occasion of Your Seventeenth Birthday 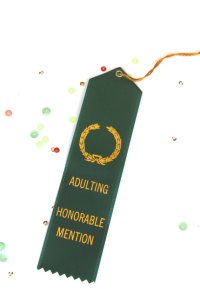 It’s your seventeenth birthday today, so I suspect you know what’s coming by now. That’s right, another long-ish and perhaps not altogether welcome letter from your dad. This is the third year in a row that I’ve subjected you to something like this (see here and here). I apologize. Kind of. Well, not really. I suppose next year these letters will have to stop, what with you officially reaching adulthood and all that. So I’d better take advantage of these last two birthdays to dump all of my wisdom (or at least nostalgia) on you before you launch out into the grown up world.

Speaking of grown ups and adulthood, I saw a young man—maybe twenty or so—walking around the other day with a t-shirt that proudly displayed a slogan that said something like, “I tried adulting today, but adulting is hard.” It’s a chuckle-inducing expression that you see a lot today. I suppose it’s meant to convey the idea that sometimes being an adult is complicated or isn’t all it’s cracked up to be or isn’t worth the effort or something like that. Or maybe it’s like a kind of social endorsement of laziness and apathy—a kind of shrug of the shoulders, an indifferent “meh” to the perceived demands of an oppressive world that inconveniently insists that we grow up.

Based a few decades spent “adulting” myself, I can tell you that the slogan on the t-shirt is both true and not true at all. It’s true in the sense that it’s not always easy to grow up, to take responsibility for yourself and your actions, to learn how to think through complicated issues in a world that seems to endlessly settle for (demand?) simplistic slogans and reactionary shouting in place of careful thinking and measured responses. It’s hard to find your place in a world that demands self-definition as a cultural imperative. It’s intimidating to think about finding meaningful work in unstable economic and political conditions. It’s complicated to start dealing with things like student loans and job applications and mortgages and (far off in the distant future!) parenting. So, yes, adulting can be hard. It can be very hard.

But on the other hand, adulting is not hard. At least not in the ways that matter most. Adulthood can, in many ways, simply be another word for “maturity.” Physical maturity, certainly, but far more importantly emotional, spiritual, moral, and relational maturity. Adults are those who treat all people as human beings, who are kind and concerned about the welfare of those many deem expendable or inconvenient. Adults don’t believe something just because it comes from the mouth of someone who is rich and powerful. Adults aren’t impressed by empty rhetoric that relies on bullying and threats. Adults are suspicious of the propaganda and marketing language that fuels and inflames our cultural discourse on so many levels. Adults have the capacity to be self-critical—to recognize that we all have our blind spots and self-serving ways of understanding and moving through the world. Adults recognize that being right isn’t always (or even often) as important as being loving. And if they are paying attention, adults are always growing in the knowledge that love is a much deeper (and more demanding) word than most of the ways in which it is thrown around out there in the world.

As I’m sure you’ve observed, there are many people out there who are technically “adults” according to the dates on their birth certificate, but who are miles away from this kind of maturity. They are petulant and lazy, they are sloppy thinkers and endlessly blame others for the things that go wrong in the world and in their lives. They are unkind and reactionary, abusing power to get their way and exalting themselves by pushing others down. They are impatient and hypocritical, merciless and arrogant. Some of these people occupy some of the most influential positions in our communities, nations, and world. But there is little worth admiring in such people. They remain childish (which is different than “childlike”—see below) in the ways that matter most. I hope you will continue to set your sights far higher than this, even if it sometimes requires setting them lower on many popular metrics of scorekeeping.

And I think you also realize that there are some people who are technically “children” but who are already leading the way when it comes to adulting in the best ways. Sometimes it is people your age and younger that put the rest of us to shame when it comes to calling out the things that should not be in our world—things so many of us have lazily accepted or given up caring about. I have seen this in both of you throughout your lives, in the ways that you have a soft spot for the outsider, the neglected, the ridiculed and ignored, in the way that you don’t chase after the herd, always panting after what is popular and socially acceptable. This makes me very proud. There are many times when I aspire to adult in the ways that you already are.

Jesus talked once about how adults needed to become like little children if they wanted to enter the kingdom of God. It’s a weird thing to say, on the face of it. Taken literally, it seems like Jesus saying he wants us to be childish or something. But I don’t think that’s true at all. I think he’s telling us some of the best ways of “adulting” in faith and in life involve the simple things that many children exhibit almost instinctively—things like trust, integrity, curiosity, openness, wonder, forgiveness, and joy. These are the kinds of adults the world needs. Those who “adult” well are often those who simply follow one of Jesus’ most basic commands: “Do to others as you would have them do unto you.” A pretty simple thing, when it all comes down to it. But also a pretty hard thing. Adulting is like that—it’s hard and not hard at the same time.

Anyway, I hope you both have the very happiest of birthdays today. And I hope you remember that you are loved dearly, by your mother and I, certainly, but more importantly by the God who made you, the God who loves you more truly and fully than even we can, no matter how well you manage to “adult” in the years ahead. I hope your lives will be spent living into, embracing, and emulating this deepest of all loves—a love that holds and heals, sustains and enlivens, forgives and redeems the world.

Thanks for beings such awesome kids who are already adulting in inspiring ways. I suppose your mother will have to take most of the credit for that. 😉

For those who might be wondering about this “blogging sabbatical” that I keep trying (and failing) to observe, I can only apologize and promise to keep trying. One of the ways that “adulting” is hard for me is, evidently, resisting the urge to write sappy public letters to my kids on their birthday each year. 😉

From: Conversations with Kids, Culture, Ethics, Fatherhood, Random Musings, The Lighter Side
← How the Bible Sounds in Occupied Territory
Being Human (Or, What I Learned on My Sabbatical) →
One Comment Post a comment