On Big Churches (And Those Who Love to See Them Fall) 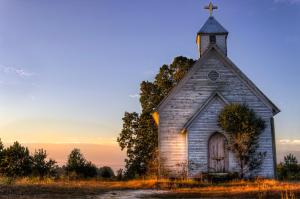 Yesterday, I posted a link on Facebook to an article by Jonathan Aigner called, “Farewell, Willow Creek: Where the ‘Regular’ Churches Can Go From Here.” It was ostensibly a kind of “where now after Willow Creek” piece. It was snarky in tone and read, at times, like an elaborate exercise in schadenfreude from an angry guy who seemed a little too happy to see a megachurch fall. But I thought the article raised a few important questions, even if I tried to distance myself from its bitterness and make it clear that I wasn’t expressing my approval for all that it contained.

As it happens, if my inbox is to be believed, not everyone appreciated the link or my attempts to endlessly qualify my reasons for posting it. Which is fine—I didn’t expect everyone to like the piece. Indeed, I tried to make clear that I didn’t like everything about the piece. But I fear that whatever interesting points I might have been hoping the post might draw out were mostly lost due to the article’s tone. Those inclined to be supportive of the Willow Creek model of church felt attacked; those inclined to be critical of the Willow Creek model happily piled on.

So, I decided to do what I often do when I fear that I may have been misunderstood or when I have misgivings about whether or not I should have posted something: I wrote a long, tortuous blog post to make everything luminously clear. Ahem. Well, perhaps not. If nothing else, I tried to isolate what I found interesting and potentially worth discussing in the piece. In what follows, some of the key claims made by Aigner are highlighted, followed my own reflections on what these statements twigged in my own brain. Perhaps it will be interesting to others, perhaps it will only add to the frustration. If nothing else, at least the Internet has a few more words now, right? 😉

Celebrity pastors cannot possibly be good shepherds to their people. Attractional worship is only entertainment, nothing more.

Like many of the claims in this article, this one seems to trade mainly in shock value. I have known and do know pastors of large churches who are good shepherds. I think the structures of megachurches make it much harder for pastors at “the top” to fulfill this role, because so much administration is often required of them. But it’s not impossible, if the right people are in place to pick up the slack. And attractional worship is only entertainment? Well how would one prove that? Is it impossible for people to encounter the risen Christ in forms of worship that this or that person might not care for?

A fast food version of Jesus can never be the real version of Jesus. The church growth movement leads to a bloated, unhealthy body of people who don’t really understand what they’ve signed up for.

I think that a lot depends on what is meant by the term “fast food Jesus.” If this term means, “a Jesus who died for your individual sins once upon a time in order to secure your post-mortem bliss” and that your task is to bask in this for about an hour once a week, well then, yes, this can never be the real version of Jesus. And this is indeed the Jesus served up by some megachurches. But not all. Some do try to present salvation in more expansive terms. Some do push toward a more holistic gospel that includes discipleship not as an added extra once the salvation ticket is secured. They don’t always do this perfectly, of course, but then that applies to those of us in small churches too, doesn’t it?

Capitalism does not hold the keys to evangelism. The Pastor as CEO idea will always fail, often with far-reaching, disastrous results.

This one is worth pondering, I think. Should churches be modeled after corporations? Should people implicitly be trained that their senior pastor is effectively a religious corporate executive? Should churches be so dependent upon a single figure to give identity, cohesion, and legitimacy to their organization? I think this is one of the lessons that Willow Creek and other dramatic falls before it might teach us. It’s dangerous to invest so much of an organization’s hopes, dreams, identity, and meaning in a single person. No person can live up to that. And I really do think that it can set these high-profile leaders up for failure. It’s too easy to come to believe in one’s own self-importance. It’s too easy to begin to believe one is invincible. Can these failures happen in small churches, too? Of course. They can and they do. But I think that big church structures can present these temptations in unique ways.

Big churches are not good role models for the rest of our churches. In fact, their methods will ruin us, too, if we’re not careful.

I would say that big churches are not always good role models for the rest of our churches. It depends, of course, on the nature and character of the big church and on the nature and character of the smaller church trying to emulate it. I have learned a great deal from leaders in big churches even if I don’t think it’s my task to reproduce their model in my context. I think no matter what size of church we worship in, we need to constantly be cultivating the grace and maturity to say, “Christ can be encountered in more ways than I, personally, resonate with.”

Getting more butts in the seats is not evangelism.

True. The American evangelical addiction to certain metrics of “success” and “church growth” have surely, in some cases, produced a culture of consumeristic Christians whose faith runs pretty shallow and has few categories by which to consider other understandings of what “success” and “growth” might look like. But by the same token, too many small-ish, liberal-ish churches have abdicated their responsibility to even consider evangelism and treat it almost as a dirty word, reeking, as they imagine it does, of colonialism and capitalism and who knows what other nefarious “isms.” Some of us, to be perfectly frank, could use a few more butts in the seats and might consider why those butts don’t seem to be attracted to our vision of Christ and his kingdom. The customer isn’t always right, it’s true. But the customer also isn’t irrelevant.

Having said all of this, I do think there was one part of the article that expressed well the opportunity that the church has in this cultural moment, in the context of Willow Creek and beyond:

So church, it’s time to rediscover your sacred, holy identity. It was never just about filling pews. Go on about the gospel that still calls to you. Go on with your liturgy. Preach the Word, administer the sacraments. Act justly, love mercy, walk humbly with God, even as it becomes more novel, more strange, and more isolating. Spread the great and glorious news that Jesus Christ has brought into this world, even when your culture no longer gives it lip service.

Amen. May it be so for big churches, for small churches, and for every church in between.

From: Faith
← Will God Forgive Us Our Addiction to Junk?
On Departing from the Script →
13 Comments Post a comment