On Elections and Empathy 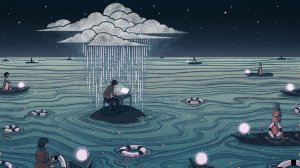 After a volatile and rancorous six weeks or so of campaigning (both by the candidates themselves and by their devoted and faithful supporters), it’s election day here in Alberta. There has been seemingly endless mud-slinging and accusations and labelling and self-serving platitudes. The UCP has mostly tried to frame this election as an overdue corrective for a staggering economy. The NDP has mostly tried to cast it as a referendum on progressive social policies. A friend commented this morning that this election might simply reveal what’s more sacred to us, sex or money. Probably not far from the truth. At any rate, I did my duty on the way to work this morning. I sighed, and I voted.

Readers of this blog will know that I am no champion of partisan politics. I have voted across the political spectrum over my twenty-five years or so of voting, both provincially and federally. I try to stay informed, to weigh priorities, to vote for the local candidate that I think will do the most good (or the least harm). But my expectations are usually fairly low. My allegiance is to another king and a different kingdom (as I’ve written about before) and I am regularly puzzled by Christians who seem to think that politics is the primary way in which this kingdom comes.

I am also increasingly troubled by the nature of our political discourse. We are losing, it seems to me, anything like a conception that we share a common life with our fellow citizens. The realm of politics is becoming inherently adversarial. For me, this was illustrated by a relatively innocuous meme that I saw earlier in this interminable election cycle. It said something to the effect of, “Millennials, you now outnumber the boomers. Get out there and vote.” In other words, “You can defeat all of those ignorant, regressive old people with your vote. Get out there and win!” There are interesting assumptions at work here. There is no notion that millennials might share a common life with their elders or that they might have overlapping interests or that—gasp!—they might occasionally have something to learn from them. No, they are simply competitors, full stop. These kinds of assumptions abound on both sides of an increasingly polarized political sphere.

I find this trend deeply problematic. People who vote and think differently than me are no longer fellow citizens who have different views and who might calibrate priorities differently, they are very bad, very stupid people. They are enemies of all that is good and decent in the world. They are ____phobes and _____ists. They exist to be defeated by right-thinking people like me. Perhaps someday they will come to see the light like I do, but until then, they must be defanged, contained, mocked, and belittled. This is the state of our political discourse these days.

I think that whatever else might be said about the above, at the very least it represents a failure of empathy, of the ability to try to see something from a perspective beyond your own. Over the weekend, I listened to an episode from NPR’s Invisibilia called “The End of Empathy.” It’s not about politics, per se, but it does paint a picture of our cultural moment that extends into the political sphere and well beyond. It contrasted the approaches of two reporters, both women, one middle-aged, one younger, who were given the task of telling the story of a recovering “incel” (about the most odious category of young men that you might imagine these days). The middle-aged reporter was more inclined to try to humanize the young man, to try to understand what could produce such a view of women and the world, and to even consider the possibility of a something like a redemption narrative in the way his story was unfolding. The younger reporter was not. The young man simply represented a category of humanity that was beyond the pale. His sins were too many and too great. There was no way back for him and it would be immoral to make it seem like there was.

It seemed to me, as I listened to the story, that this is a theme that reproduces itself across our public discourse, including the political sphere. We are losing the ability to see actual human beings behind the views they hold. Someone who thinks differently than us about sex or money or pipelines or education or healthcare isn’t someone to have a conversation with, they are disgusting sinners who have all but forfeited their humanity. Someone who has a different coloured sign on their front lawn is not a neighbour but an incomprehensible enemy. And so, we get what we get every election cycle: an ideological slugfest with results that swing wildly back and forth, dictated by whoever has enough people that feel like they’ve been on the wrong end of the score for the past four years.

My kids are not old enough to vote provincially this time around, but they will be by the time the federal election rolls around in fall. I don’t want them to internalize this vision of politics that we are modeling for them. I don’t want them to see a ballot in the election box as their weapon against the very bad, very stupid people. I want them to be willing to sit down with people who think differently than them and do the hard word of trying to understand them and what might motivate their priorities. I want them to see fellow citizens instead of ideological enemies to conquer. I want them learn how to live with difference responsibly, with both conviction and empathy.

I want the same for myself. And I want it for you, too, dear reader. If you have made it this far, and if you happen to live in Alberta and are voting today, and if you happen to be inclined toward weaponizing your social media feed later today either in exultant glee or righteous indignation, perhaps consider a different approach. Maybe have a conversation with someone you disagree with instead. Or ask, “I wonder why they might calibrate their priorities differently than I do?” Or consider a slightly more charitable interpretation than, “They’re an idiot.” We really have to do better, I think, if we are ever to do this “pluralism” thing well. Today is as good a day as any to give “better” a try.