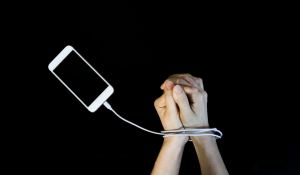 A few people have asked me over the last few weeks how it’s been since I deleted my Facebook account. The short answer is that I haven’t really missed it. There have been a few times when I have felt a little in the dark, not knowing something what others in a conversation did because I hadn’t seen what this or that person posted. I’m sure I’ve missed out on the odd article that I really should have read or an important update in someone’s life. These are among the expected trade offs that are part of the deal.

One of the more intriguing things I’ve noticed is that I feel a bit less twitchy than I did when Facebook was a part of my daily life. You know what I mean by twitchy, right? If not, I’ll let Alan Jacobs elaborate. He has this to say in Breaking Bread with the Dead about the experience of observing his students’ heads bowed toward their glowing screens before and immediately after class, and instinctively reaching for their phones at various points throughout the class:

I know how they feel. When my students are taking a quiz there’s nothing for me to do, so my hand then drifts toward my phone—or did, until I finally forced myself to stop carrying my phone around; and my twitchiness during quizzes was among the chief factors that pushed me to that decision. That twitchiness—that constant low-level anxiety at being communicatively unstimulated—seems so normal now that we may be slightly disconcerted when it’s absent. That’s why a tweet by Jason Gray, a writer for The Wall Street Journal, went viral a few years ago: “There’s a guy in this coffee shop sitting at a table, not on his phone, not on a laptop, just drinking coffee like a psychopath.”

That last line made me laugh but it’s so true, isn’t it? Can we even imagine a person just sitting, alone, sipping a cup of coffee in a public place, not “justifying their existence through work or social connectivity?” And this business of a “low-level anxiety at being communicatively unstimulated” is one of the things that I suspect many of us resonate with. I certainly know this feeling far better than I would like.

I was having lunch with someone today and the topic of masks came up. My friend had been on the receiving end of some public critique for posting a picture of himself wearing a mask at a public function. And of course, if he had posted the same picture of himself without a mask, he would have gotten criticism from a whole other segment of the population. The conversation that followed was an interesting one for me. He talked about how much anger he was seeing out there, about the bubbling resentment building toward masks and increasing restrictions and the freedoms being trampled on, etc.

What was interesting to me wasn’t necessarily that all this was happening. I read the news, of course, and I know about the polarizing effect that COVID restrictions are having in our community. What I found interesting was that this wasn’t front and centre in my brain the way it might have been if I were still on Facebook. I don’t miss the digital fire hydrant of righteousness and resentment or the endless reactivity at all. I’m happy to be unaware of what people in my orbit think about divisive things. I’m rather enjoying the process of “escaping the dire hose.” I’m happy to sit down over coffee and discuss politics or religion or masks or anything else with anyone. But I don’t need to know what everyone is thinking or how they’re reacting to things all the time. I don’t have the bandwidth and I probably never did.