Well, I just returned from a wonderful week away and am spending a good chunk of today slowly wading through a very clogged in-box! One of the more humourous discoveries I have made thus far in my wading is this cartoon sent by a friend last week. 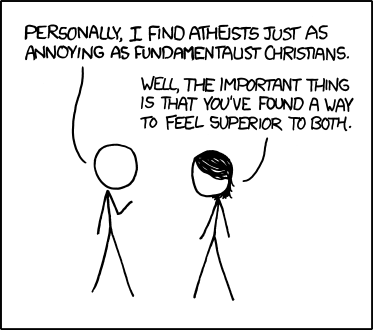 As is so often the case, it is funny because it is true…

On a somewhat related note, despite my best intentions to read nothing remotely work-related on my holiday, I did crack open Czech priest/writer Tomáš Halík’s Patience with God during my time away. Halík does have the two extremes alluded to in the comic above in view, but this book is less an expression of annoyance at these two poles than a desire to move beyond them.

Among the things I have been intrigued by in this book, is Halík’s interest in what he calls the “Zacchaeuses” of the world—those who are interested in Jesus, but from a distance. Halík uses this category to describe the many people who are genuinely attracted to Jesus or spirituality or discipleship or whatever other term might be preferred, but who, for a variety of reasons, find it difficult to get close. They are morally and spiritually sensitive people who just can’t seem to fit with “religious” people or institutions but who are also repelled by the strident atheism at the other end of the spectrum. It is to these people that Halík feels called:

In my pastoral work as a priest, but also in all my other fields of activity—my books and articles, university teaching, and the media—my aim has always been neither “converting the converted,” nor caring for the orderly sheep of the flock, nor even engaging in never-ending polemics and disputes with opponents. I don’t think my chief vocation ought to be “mission” in the classical sense, if by that one means winning over as many people as possible to one’s own church flock or political persuasion. I feel that my chief purpose is to be an understanding neighbor for those who find it impossible to join the exultant crowds beneath the unfurled flags of whatever color, for those who keep their distance.

I’ve read many books on the pastoral vocation, mission, calling, etc, but I’m not sure I’ve ever come across as good an articulation of how I understand my role as a pastor as that one. Perhaps it is because, like the “Zacchaeuses” Halík speaks of, I, too, am wary of the exultant crowds…

People often construe the distance that Zacchaeuses maintain as an expression of their “superiority,” but I don’t think they are right—things aren’t that simple. In my experience, it is more the result of shyness. In some cases, the reason for their aversion to crowds, particularly ones with slogans and banners, is that they suspect that the truth is too fragile to be chanted on the street.

I really like that line: “they suspect that truth is too fragile to be chanted on the street.” For me, the word fragile does not here denote a sense of tenuousness or lack of strength/solidity or anything like that; rather, it gets at the idea that truth is not a possession that we can lay hold of or use to manipulate others to do/think what we want them to do/think. Truth is “fragile” in the sense that it resists our attempts at commodifying it or using it as a weapon against our enemies. Truth must be treated with care.

From: Apologetics, Atheism, Books, Doubt, Faith, Jesus, Mission, Pastoral Ministry, Quotes, The Lighter Side
← A Short (and Welcome!) Hiatus
I Can’t Either →
12 Comments Post a comment