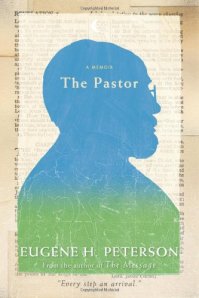 I finished Eugene Peterson’s The Pastor last night while waiting for the kids to finish up at piano lessons. It was a good book (if a little more hortatory than one might expect from a memoir) and I am grateful for the window that it provided into the life and career of a man I admire greatly. Perhaps unsurprisingly, over the course of reading Peterson’s memoir I have found myself reflecting often upon this peculiar vocation called “pastor” that I have found myself in, how I ended up here, and what I understand it to be.

I’m still pretty new at this pastor thing, of course, and hardly qualified to be writing with any kind of authority upon the pastoral vocation. But reading about the unlikely path that led Eugene Peterson to become a pastor inevitably led to a bit of musing about the strange ways that God leads us into doing the things we do…

If you would have asked me as a younger person if I would have ever seen myself as a pastor, your query quite likely would have been met with outright laughter and/or a snort of derision. The vocation of “pastor” was not exactly a highly-esteemed one, in my youthful view. This wasn’t because I had bad pastors or terribly negative experiences in the church, or anything like that. It was mainly because I was a pretty typical kid who often found churches—and sermons, in particular—to be insufferably dull and irrelevant to the things that were important to me (girls and hockey, mainly). I didn’t really know what pastors did, aside from being boring on Sunday mornings, but I assumed that they read the Bible a lot (and enjoyed it, inexplicably!), talked about the Bible with others, and visited sick people in the hospital. Not exactly the life of adventure and intrigue that sets the imagination of a teenager alight.

Later on, as a young adult, my conception of “pastor” would expand beyond “boring sermon-producers who enjoy reading the Bible more than I do” to include “people who try to sell religion to those who don’t have it (and probably don’t want it).” Somewhere along the way, I picked up a kind of conception of pastor-as-salesman (they were always men), where everything they said and did was a kind of set up to sneak Jesus in the back door. They weren’t really interested in you as a person, or any questions you might have had, or what any of your hopes and fears and existential anxieties might be. Their job was to save your soul and to keep you (and others) in the pews.

I must stress, again, that these negative conceptions have virtually nothing to do with any of the pastors I actually had. I have been fortunate to have some very gifted, competent pastors who have contributed to my faith in ways that I am barely able to articulate. Some I still look to for wisdom to this day. Yet for some reason, the word “pastor” obtained and retained a negative connotation in my confused, immature, selfish little brain. Perhaps I saw one too many horrific American religious television programs.  Perhaps it was because few of my friends seemed to admire or respect pastors. Perhaps I was unusually thick, and somehow didn’t connect the good and intelligent people in my life who occupied the role to the word “pastor.”

At any rate, given the above, it is more than a little ironic—amusing, even!—that I now find myself in the position of wrestling with and growing into the vocation of “pastor” (it was gratifying to read that even the great Eugene Peterson took time to warm up to the idea!). Truth be told, I still squirm a bit when the “so what do you do?” question comes in social settings. The word “pastor” is certainly not a dirty word for me anymore. I have grown and matured a bit, over the last couple of decades (thanks be to God!), and my understanding of “pastor” has become a much more liberating and expansive one due, in no small measure, to reading people like Peterson, and getting to know many gifted and intellectually vibrant pastors as friends and colleagues. But “pastor” is still a word that fits a little bit awkwardly for me.

I don’t know why this is, exactly. Undoubtedly it has more to do with my importing of what I assume others perceive a pastor to be and do than it does with the nature of the vocation itself. I am not, and will never be, a salesman of religion. I am not fond of the idea that people might consider me to be some kind of an alien species who happens to be interested in “that kind of thing” (i.e., God, religion, etc) I shudder at some of the things pastors sometimes say, and I shrink from the anti-intellectualism that is sometimes associated with the word. For some reason, I tend to assume that these images, rather than the numerous other more healthy (and accurate) images, are what people are thinking when I identify myself as a “pastor.”

And yet… I am a pastor. Why? Well, I still wonder, at times, and there are certainly many things that I could say in response to this question. But one of the ways that I have increasingly come to conceive of my own vocation and identity is simply as one who keeps the story of God alive in the hearts and minds and lives of people in a culture where the story is easily ignored, abused, misused, or forgotten.

Not to save souls, not to populate churches, not to run religious programs, not to make the Bible “relevant,” not to rescue people from desperate situations, not to prop up people’s flagging faith, not to write books (although that would be cool!), not any number of other things that commonly get associated with the word “pastor.” But continuing to tell and to keep people alive to the gospel story of life and meaning and  hope? I can get excited about that. I can fit that into my conception of the word “pastor.” I can live with and into that kind of word.