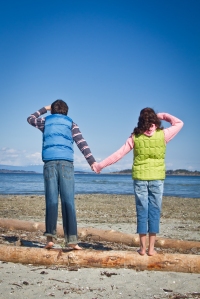 As hard as it is to believe, my two lovely children are on the verge of completing their first decade on planet earth. It’s been an incredible ride so far. We have been blessed beyond measure both with the members of our family and how we have been put together.

Our own adoptive journey came to mind when I was directed to this post by Megan Hyatt Miller (h/t: Jesus Creed) on whether or not adoption is becoming “trendy.”  I suspect many of us, in our more cynical moments, have wondered after, say, the fifteenth celebrity adoption headline of the week, whether or not the kids being adopted were at least partially being pressed into the service of the personal branding of rich Westerners. We’re so desperate for something to set us apart, after all, something to mark us off as unique, noteworthy, special. And a couple of kids whose skin is a different colour than our own will not only get us noticed, but will likely make us seem virtuous for heroically “rescuing” some disadvantaged child from heartbreaking circumstances. Win win, right?

Our story is not one of international adoption (i.e., we didn’t travel overseas), but our kids are a different ethnicity than either myself or my wife. Does this make us trend chasers? Well, I think that Miller very ably articulates, from a Christian perspective, some of the reasons why this is not necessarily the case. Here are her five reasons (in bold) with some of my own commentary between each:

1. There is a difference between a trend and something that is “trendy.”

… and some trends are good. Even if people’s motives are less than completely pure (and really, which of any of us does anything with completely pure motives?), kids are finding homes. Which is good. Full stop.

2. Adoption is not a new idea, but Christians are finally starting to take the biblical mandate to care for orphans seriously.

…What is new, I suspect, is the possibility of adoption as personal branding/identity bolstering. Although it’s always been possible (and tempting) to make a show of one’s good deeds…

3. Now, more than ever, Christians place a premium on alleviating the suffering of others.

… Maybe. I think that parts of the evangelical world are waking up to the wider implications of the gospel. But more than ever? Hmm… I tend to be suspicious of “now, more than evers…” But to whatever extent Christians are adopting in order to alleviate suffering, I think this is to be commended.

4. Transracial adoption reminds us of what the Kingdom of God looks like.

… Amen. The kingdom of God is not comprised primarily of white Westerners (thanks be to God!).

5. Those interested in being “cool” are quickly weeded out by the process.

… I don’t know of this personally, but I do think that the novelty of adoption would wear off for those who are pursuing it for the wrong reasons. It can be a costly, time-consuming, and invasive process to adopt. Hopefully this weeds out those who shouldn’t be doing it in the first place.

In addition to these five, I would add something that, while hardly unique, I have learned from our own journey. Quite simply, being an adoptive parent has given me a deeper appreciation for what it means to be adopted as a child of God than I would have otherwise had. Adoption—whether my children’s adoption, or my own adoption into the family of God—is a beautiful thing. Of that, I am absolutely convinced.

But when the fullness of time had come, God sent his Son, born of a woman, born under the law, in order to redeem those who were under the law, so that we might receive adoption as children.

From: Adoption, Faith
← The Brains of Religion (My Hippocampus is Bigger Than Yours!)
On Narratives →
7 Comments Post a comment