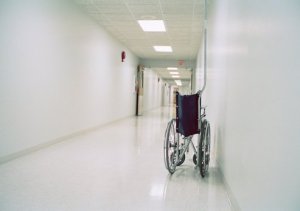 I have never liked hospitals. Hospitals can so often seem to be places where we attempt to sequester the pain and confusion and despair that are a part of so many lives—to keep them out of sight and out of mind. When we go to the hospital, we look in a mirror and we see ourselves in 5, 10, 20, 50 years—it doesn’t really matter how long. The question isn’t if but when we will take our place amongst all of these broken down worn out decaying bodies.

How do we live and move inside these places? How do we pretend to have normal conversations about weather and sports and church and children’s activities alongside a wild-eyed woman stumbling around with her dressing gown wide open, or a sad-faced old man who keeps wandering around blankly, pushing his walker into chairs? How do we visit when the woman next to us is sobbing confusedly as she coughs down her sixth pill of the morning? How can we speak of things like eternity and suffering and salvation over the din of mindless television programs blaring to occupy these fading treasures of glorious humanity, these flickering lights? How do we pray and talk and laugh and speak of life in these halls of death? What good could possibly come of our feeble attempts to wrest order out of all this chaos?

I get back into my car after my hospital visit and the man on the radio is interviewing a physicist from Oxford. They’re talking about quantum physics, relativity, and the “undeniable” existence of multiple universes parallel to our own. In another universe, right now, I am having completely different experiences than the “me” that I think is exclusively real is currently having. Maybe I’m riding a scooter or a horse. Maybe I’m skydiving or planting a garden. Maybe I’ve taken up smoking.

The conversation is lively and enthusiastic, full of impressive sounding facts and statistics and studies and recent developments. “But it all just seems so unbelievable,” says the program host to the Oxford physicist. The esteemed scientist replies, “well, the question is do you want to understand the world as it really is or not? This is the way progress is made.”

Maybe in another universe the dear person I visited this morning is not staring blankly at a wall, wondering if the doctors will be able to fix all the problems, and wring a few more years out of what has already been a full life. Maybe in a parallel universe there are no more tests to wait for, no more antiseptic smells and sterile utensils, no gross-looking half-eaten jello on the plate, no harried “recreation therapists” with no time to talk, no bedpans and vomiting, no wilting flowers and limp balloons, no visits that are always too short.

There may be other universes out there where better things are happening to other versions of ourselves. There may be a heaven, for that matter. Both can seem equally remote and irrelevant from “the world as it really is.” After a trip to the hospital, I am less interested in the question of how many universes it takes to explain the one I see than I am in whether the one I see has love and hope in its future.

I read these words from Romans 8 in the hospital today:

For I am convinced that neither death, nor life, nor angels, nor things present, nor things to come, nor powers, nor height, nor depth, nor anything else in all creation, will be able to separate us from the love of God that is in Christ Jesus our Lord.

The love of God in Christ Jesus our Lord. Enough for multiple universes. Enough for the hospital room.

From: Death, Faith, Gospel, Hope, Pastoral Ministry, Prayer, Stories on the Way
← Awakened in the Stream
500 →
21 Comments Post a comment