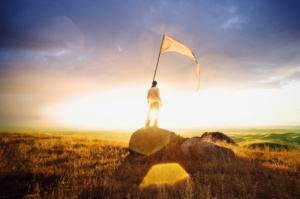 I’ve written a lot of posts about death here over the years. Usually these are reflections upon the pain and the longing that accompany death, or about what the existence of death and our reaction to its inevitability might say about what it means to be human or about the nature of God and God’s promise. Or these posts represent a personal encounter with death—they are reflections about what it’s like to walk with people through death, or the experience of grief, or whatever.

I’m in a bit of a different space today. I’m thinking of a good friend whose dad is dying of cancer. I’m thinking of another friend and a teammate who died a few years ago, whose life we remembered at a charity golf tournament last weekend. I’m thinking of other people who I know who are nearing the finish line of lives well lived. I’m thinking that what I’m feeling isn’t really grief or sadness or confusion or longing or hope or any of the usual emotions that accompany death. I’m feeling something like a defiant anger, I guess. I’m looking at the quote above, and I’m thinking about the banner I walk under as I march toward the inevitability of death.

How credible is it, this banner of mine? What good is the faith I profess, when it comes to this business of dying. It doesn’t prevent it, of course, nor is it even much use at delaying it, no matter what the health and wealth and healing types might say. People of faith seem to get sick and die at roughly the same rate as anyone else on the planet, in my experience. Believing in God doesn’t keep ugly realities like cancer away. It doesn’t even necessarily make us “at peace” with death, whatever that might mean. As if we could ever be at peace with so menacing an enemy. It offers us hope beyond death, we claim, but who’s to say how credible this hope really is? Could these banners not just be fictions that we console ourselves with, as death looms on the horizon? Aren’t we in fact quite good at telling ourselves stories to keep the ugly horror at bay?

And yet I wonder, why would it ever occur to us to construct these banners? Why would we be so lousy at accepting this reality that our planet has had so much practice with? Could it not be that these impulses, these stories, these banners are a response to something that is real? Could they not be a response to a whisper from across the sea?  Could our hunger for life not point to something deep within us that was intended to be? Could the telling of these stories of a hope beyond the grave represent one of the deepest and truest things that we could ever do?

We march forward, toward death. All of us. We know this. I look at those around me who have walked or who are walking through the valley of the shadow and I think, “Someday that will be me.” I will lose people who I love dearly. My body will break down and betray me.  I will one day stand face to face with death. And then?  Will this banner of faith prove credible as death elbows its way into view? Will this story of a dying God who defeats death by tasting its sting and rising to life help anything, as this world with all its dying keeps right on spinning, as if it didn’t even notice that the rules have apparently changed?

Yes, it will. Surely it will. It has to. I don’t want some kind of vague or feeble hope that there’s “something good on the other side.” I want to stand strong under this banner and look death squarely in the eye. I don’t want to cower in fear or make imaginary deals with God to buy more time for myself or those I love, or anything like that. Death will come, I know that. It always does. But whenever it comes, I want to face it with, I don’t know, confidence? Conviction? Determination?

I don’t know what the word is, but today I’m feeling like I would want to say to death, “Yeah, fine, you’re here, and I know you’re gonna hurt like hell, but I want you to know that there’s more to this story. My end is a beginning. And you, too, will one day know what defeat tastes like. You, too will hurt and stagger and reel and expire when life is finally vindicated and you are swallowed up once and for all…

When the God who spoke life into being stands over your grave and permits you to speak no more.

On this mountain he will destroy the shroud that enfolds all peoples, the sheet that covers all nations; he will swallow up death forever. The Sovereign Lord will wipe away all the tears from all faces; he remove his people’s disgrace from all the earth. The Lord has spoken.