One Body, For All the Wrong 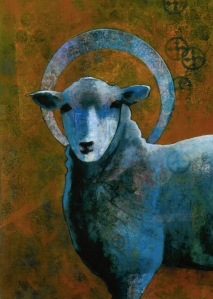 I sometimes think of strange things on the way to work. Today is April 8, 2014. Yesterday it was 20 degrees Celsius here in southern Alberta. This morning it is snowing. This seemed somehow wrong to me as I was driving down the highway this morning. Yesterday the window was open. Today the defrost is on and there is snow on the hood of my car. Yes, this is very wrong indeed.

As I was pondering the deep and mysterious wrongness of southern Alberta weather patterns, I began to wonder about other wrong things in our world. I began to wonder about how many things are said, each day, in our communities, cities, nations, and world, that are wrong. How many factual errors? How much sloppy and inaccurate reporting? How many people pronouncing upon things they know little about? How much of noisy chatter in Internet-land is simply misinformed and incorrect? How are we able to wade through all this wrongness and still function?

And then I thought more serious wrongs. Moral wrongs. Sins, for those who will still countenance such antiquated language. How many lies and hurtful words are thrown carelessly around? How many actions and behaviours are undertaken with the intent to injure, to ridicule, to deface and belittle? How many relationships are sabotaged by selfishness and pride? How many times, each and every day, do we, with the Apostle Paul, deliberately do the things that we know we shouldn’t do, the things that, in our better moments, we don’t even really want to do (Romans 7:14-25)?

And then I thought of the horrible, large-scale wrongs. The wrongs that are the net result of all the accumulated big wrongs and little wrongs and in-between wrongs of all the days our planet has ever witnessed. All of the life-negating warfare, all of the abuse of power, all of the wreckage of human sin and stupidity, all of the betrayal of innocent and powerless human beings, all the environmental degradation, all of tribalistic violence in all its forms, all of the wrongness, all the things that should not have been that have left their stain on the stage of history.

How does the world keep spinning under the weight of all the wrong that we have done, are doing, and will do? How does it not crush us? How can history even keep moving in the face of so much wrongness? How can the world recover from so many errors, so many lies, so much hurt, so much evil and destruction? How can these gaping wounds ever be closed?

Throughout the season of Lent, the daily readings in my prayer-book have always included 1 Peter 2:21-24:

21 To this you were called, because Christ suffered for you, leaving you an example, that you should follow in his steps.

22 “He committed no sin,
and no deceit was found in his mouth.”

23 When they hurled their insults at him, he did not retaliate; when he suffered, he made no threats. Instead, he entrusted himself to him who judges justly.24 “He himself bore our sins” in his body on the cross, so that we might die to sins and live for righteousness; “by his wounds you have been healed.”

He himself bore our sins in his body on the cross…

The questions come crashing in. How could one body absorb so much wrongness? How could it bear the weight, carry the load? How could this one body’s wounds heal all of the other wounds? What right does this one body have to take on all the wrongs? There are some, after all, that we would prefer to cling to. Wrongs are useful sometimes. Other people’s wrongs, usually. They are good for leverage, for self-justification, for perverse expressions of pride and judgmentalism. We would rather keep them for ourselves than to allow this one body to bear them far away from our greedy and confused hands, hearts, and minds. What if we don’t want this one body to have all of the wrongs?  What if we don’t trust this one body?

So that we might die to sins and live for righteousness…

We don’t know how this one body could bear all this wrongness. This is very strange math indeed. The sums don’t work. But the result is always the same. This one body did not die simply to bear the load of all the wrongs we have piled up over long years of pain and waste. This one body died so that we, too, would die to the wrong and come alive again for the right, the good, the true, the beautiful.

In these last days of Lent, the wrong seems very heavy. We know who we are and what we have done. We know what is coming. We know what will happen to this one body. For us. But the deep hope we always cling to, the bright light on the horizon that all the wrongness within and without can never dim, is that this one body is not just the place where all the wrongness brutally descends, but where the rightness will rise, forever declaring that there is no wound of wrongness that cannot finally be healed.

The image above is taken from the 2011-12 Christian Seasons Calendar. It is called “Agnus Dei” and was created by Carolyn Coolidge Brown as a response to the voice of the Lamb of God, who takes away the sin of the world.