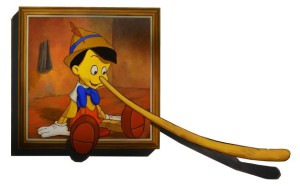 This morning I was half-listening to CBC radio interview with a Colorado journalist who was suing a local politician for describing a piece he had written as “fake news.” At least that’s what I think he was doing. As I said, I was only half-listening. But there was a lot of discussion about truth and power and the stifling of dissent and questions like how do we even know what’s real or true or reliable anymore when people like Donald Trump can just pole-vault over traditional media sources (which are, of course, all corrupt and biased against him) and present his own version of the story via Twitter bursts which are then gratefully seized upon by his adoring followers? Poor truth doesn’t stand much of a chance in conditions like these.

I overheard a conversation the other day that was talking about what to do about people spreading misinformation and abusing their opponents online. The general idea seemed to be that the onus fell on social media platforms. They have a duty to police hate speech or fake news better or something of the sort. We need warnings when a site isn’t reputable. We need alerts or flags or something to tell us that what we’re encountering isn’t true or good or worthy of our attention. We need, in other words, some way to outsource these difficult processes of reflection and evaluation and discernment.

There may some meagre value in efforts like these. But the bigger issue, of course, is the kind of people we are becoming. Better policing of the digital public square may have positive effects, but it’s not going to address the core problem which is that we are, evidently, becoming the kind of people who are abusive and ignorant and self-interested and careless and who knows what else. Human beings have ever been thus, of course, but the Internet seems to have provided us with an enormous unfettered playground within which to broadcast and inflame these tendencies.

I read an article over at the Christian Century today that was wrestling with how to proceed in this “post-truth” age. The authors isolate what I think is a crucial, if obvious point:

But if anything has become clear in recent months, it’s that telling the truth is more than a matter of thinking hard or having access to reliable information. It is also a matter of being a certain kind of person. The virtue of truth telling is intertwined with the exercise of other moral virtues.

Which virtues, you might be wondering? Well, the writers of the article point to a few: Humility, openness, correction, and a willingness to engage in genuine argument. These, they say, are what allow for a community of truth telling. I would agree. And of course these are precisely the virtues that seem so painfully absent in our present political, cultural, dialogical moment.

Our discourse is toxic not because Facebook and Twitter don’t have enough restraints or because our web browsers don’t have reliable enough “BS Detector” extensions (these are actual things, apparently), but because we are or are becoming the wrong sorts of people. We are nurturing in ourselves the worst impulses toward self-righteousness, binary thinking, scapegoating, and a herd mentality. And we are failing to cultivate the virtues that would make our shared life together more productive and humane, more open to learning from one another, more committed to achieving clarity on where our differences lie and why they matter, more invested in negotiating together how to live in peace.

There will never, ever be a shortage of voices lining up to tell us precisely what we want to believe, what we already believe, what we have a vested interest in believing to be true, whether that interest is emotional, financial, political, theological, or whatever. Particularly in this digital age where there are so very many voices with so very many interests in having us click and share and shriek and howl with outrage. I am convinced that part of what it means to be committed to the truth—particularly from a Christian perspective—is to have a fairly settled suspicion of ourselves and our motives, to recognize that there is always another side to the story. At its best, this posture toward truth will make us increasingly humble, generous, curious, even while we are honest about our convictions and committed in holding them.

And I am even more convinced that the pursuit of truth is inextricably linked to the pursuit of virtue. We human beings are so much more than fact-checkers or robotic evaluators of data. At least we ought to be. This isn’t to suggest that facts and data are unimportant. Far from it. But all the facts in the world won’t help us or our collective discourse much if we continue to ignore the kinds of people we are becoming in the process of contesting them.