“Christ Did Not Die for the Good and Beautiful”

I finally got a chance to see Silence over the weekend. The film arrived late in our town, and even then only in the second-run theatre (I imagine its themes were probably deemed “too religious,” and therefore not profitable enough for mass consumption). The film is Martin Scorcese’s long-awaited adaptation of Shūsaku Endō’s 1966 novel of the same name, and is set in the context of the 17th century persecution of Japanese Christians by the Inquisitor Inoue. It is a masterfully made film based on a beautifully written novel that asks hard questions about the nature of martyrdom and faith and fidelity and suffering, and, of course, about the silence of God.

I won’t pretend to offer anything like a formal review or even a summary of the story here. There have been plenty of good analyses done elsewhere (i.e., this one by Gregory Wolfe or this one by Brett McCracken). I also posted an essay I wrote on Shūsaku Endō’s novel a few years ago here. But as I’ve sat with the film over the past few days, as I recalled my reading and wrestling with the novel, and even as I discussed it with a friend about it this morning, I have noticed that the way in which I have engaged with this story has changed over time.

When I first read the novel I was in my twenties, I quite naturally (and probably arrogantly) identified with the protagonist, Fr. Sebastião Rodrigues. His is the crisis of faith that the novel narrates, after all, and his is the agonized choice that the whole story builds toward. Will he renounce his faith to save his Japanese sisters and brothers who are being tortured, or will he cling to his faith, even at the expense of the lives of these innocent peasants. What would I do? Would I stay strong? Would I be willing to suffer for Jesus? These are among the questions that immediately leap to mind, at least from a Christian perspective. And these were the questions that first occurred to me.

The second time I read the novel, I was in my thirties. This time, I found myself less interested in whether or not I would preserve my faith than I was in the silence of God. How God could possibly allow such suffering? How could a God of love stand idly by while these poor people whose lives were already so brutally hard were tortured in such exquisitely cruel ways? And, more broadly, how do we as people of faith live with the silence of God in light of the innumerable injustices and barbarisms that our blood-soaked histories bear witness to? My engagement with the story this time around was probably more accusatory in nature: God, how in the hell can you be silent when there is so much in our world that cries out for you to speak and to act? 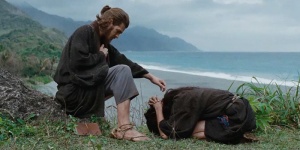 This time around, in my forties, I found myself drawn most deeply to the figure of Kichijiro, the wild-eyed drunk who skulks, Gollum-like, around the borders of the story. Kichijiro is a Japanese Christian who accompanies Frs. Rodrigues and Garupe from Macao to Japan, who leads them to the Christian community in Japan that is starving in the shadows. Kichijiro is also well practiced in apostasy, having denied Christ in front of the authorities numerous times to save his own skin. He is a conflicted character, having suffered deeply, losing his entire family to tortuous machinations of the Inquisitor, but also being quick to betray his fellow Christians to the Japanese shogunate and the Inquisitor Inoue.

Kichijiro is the Judas of the story, willing to sell Rodrigues for a few pieces of silver. His is a life marked by shame. He is viewed with disdain by his fellow Christians for his many treacheries. He is treated with suspicion by Rodrigues, to whom he continues to return seeking confession and absolution for his sins. He is hounded by guilt and desperate for forgiveness, yet he cannot change his ways. He is a coward and a liar and a duplicitous wretch. Yet as Rodrigues surveys the miserable figure before him, begging once again to confess his sins, he remembers that “Christ did not die for the good and beautiful. It is easy enough to die for the good and beautiful; the hard thing is to die for the miserable and corrupt.”

At one point in the story, Kichijiro says that he could have been a good Christian if he had been born in another time and place—a time and place that did not place such impossible demands upon faith. He wants so badly to be a Christian, but he is weak and selfish and cowardly. And this is perhaps why I am drawn to him. For I, too, am weak and selfish and cowardly, even in conditions that look nothing like seventeenth century Japan. I, too, desperately want to be a person of faith, but find a thousand tiny little betrayals to be so much easier and more convenient. And I too, am desperate for forgiveness, for absolution, for the reassurance that no matter how many times I turn away from the face of Christ, he will never turn away from me.

Scorcese’s adaptation of the novel is pretty much flawless in my view, except for the moment at the end when Rodrigues steps on the fumie—a plaque with the image of Christ’s face on it—to end the torture of his Japanese Christian brothers and sisters. In the film, the voice of Christ speaks to him and says something like, “Step on me, because I came into the world to share your pain.” I prefer the words of Christ as rendered in Endo’s novel:

Trample! Trample! I more than anyone know of the pain in your foot. Trample! It was to be trampled on by men that I was born into this world.

It seems to me that there is deep truth and hope in these words—a truth and a hope that can never be exhausted by the many betrayals of the Kichijiros who find faith so hard, yet cannot live without it. The One we deny is the One who never stops calling out to us, forgiving us, absolving us, seventy times seven. The One upon whose face we trample is the the One who knows that we are not very good or beautiful—that we are miserable and corrupt—and yet dies for us for us still.