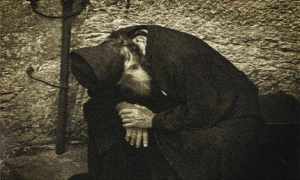 I spent part of this morning on sin. Not actively sinning, I should hasten to add, although I probably accrued a few transgressions before breakfast. But let’s leave that aside, shall we? Instead, I’d like to talk about a lecture that I watched today from the recent Mockingbird NYC Conference. It was called, “Hiding in Plain Sight: The Lost Doctrine of Sin,” and was delivered by University of Nottingham theologian Simeon Zahl. In it, Zahl described sin as a “diagnostic tool of great power.” We can’t make sense of ourselves, the world, or God without the category of sin. And yet, says Zahl, there is no theological assertion more likely to meet such resolute opposition among his students than this.

This likely comes as little surprise to anyone who has been awake and paying even the slightest attention to the world around them over the last half-century or so. “Sin” language is, shall we say, not terribly popular, inside or outside the church. It is thought best consigned to the dusty attics of our unenlightened ancestors who didn’t know the first thing about brain chemistry or the social architecture of human behaviour, who believed in all manner of magic and superstition, who wasted countless hours agonizing over and confessing moral failures that we now know to be either prudish or illusory, who searched the heavens in anguish when they ought to have been searching the pharmacy for the right pill. “Sin” is a word that makes us feel icky and guilty about ourselves and we’ve mercifully moved beyond all that by now.

It occurred to me as I was listening to Zahl’s lecture that the wholesale transfer of all the negative emotions and experiences that were once associated with “sin”—anxiety, guilt, feelings of worthlessness, despair, etc.—from the moral to the medical domain is not without its losses. The most obvious one, of course, is that it pulls the ground out from underneath us when we feel the need to make moral judgments on people’s behaviour. If every behaviour is the result of some combination of biology and sociology, then it’s hard to know how we can or should hold people responsible for the destructive things they do. Who knows, perhaps it will one day be discovered that Donald Trump has some kind of a disorder that could squirrel its way into the DSM—maybe something like a “megalomaniacal narcissistic disorder.” Consistency would seem to demand that we describe him as a victim. And yet I’m guessing we might like to retain a few moral categories with which to evaluate the decisions that he has made and is making.

Which leads to what I think is the most interesting aspect of our often incoherent approach to language of sin and disorder, guilt and victimhood. In our haste to get rid of sin, we ironically end up with what I would argue is a fairly truncated and not terribly flattering picture of humanity, particularly when considered historically. The medieval peasant who agonized over the status of his soul and wept for his sins would seem to possess a far more exalted view of what it means to be a human being than a twenty-first century sophisticate who considers herself to be a powerless bundle of chemical reactions acted upon by myriad forces beyond her control. The tax collector who beat his breast and said, “Have mercy on me, a sinner” rises to loftier heights of humanity than the ivory tower academic who considers every human behaviour to be explained without remainder by genetics and social environment. Or so it seems to me, at any rate.

Christianity asks us to pay ourselves a dreadful compliment. Actually, it doesn’t ask, it demands that we look ourselves and the world squarely in the eye and hold two truths together: 1) We are the inheritors and victims of a broken system that breaks us in countless ways from our very earliest days; 2) We are sinners who contribute to these systems (i.e., they’re not just abstract forces out there) and are morally culpable for the things that we do. These two truths will of course be calibrated differently at various points in our disparate stories. Some choices are more the result of 1) than 2) and vice versa. Sometimes—most times, even—it will be perilously difficult to parse out the percentages, and we would probably be well advised to avoid this even if we could. God knows there has been enough damage done over the years by those who are all-too-eager to ferret out the sources of their neighbours’ transgressions.

But however our freedoms are constrained, we are, indeed, free. Terribly so. A cursory glance at the entire edifice of our legal system, not to mention the most casual assumptions we regularly make about one another in our everyday interactions bears this out (as does imagining what might happen if these were to be abandoned). And freedom implies accountability. We must keep the two categories above in play. Failure to do so inevitably leads us down a number of confused and incoherent dead ends.

Focusing exclusively or primarily on 1) gives us a language with which to condemn systems and structures and forces that oppress and afflict human beings and prevent their flourishing, but give us few tools for consistently demanding that we actually aspire to moral change and growth. Focusing exclusively or primarily on 2) gives us a tool with which to abuse our neighbours and our enemies that utterly fails to take seriously the fact that there really are factors beyond our control that influence and constrain our choices and behaviour.

In other words, we need sin, probably more than we even realize or acknowledge. Wait, I don’t mean to say that we need sins per se, or that we need to sin or that I like sin or… well, you know what I mean.