Give Me an Apocalypse 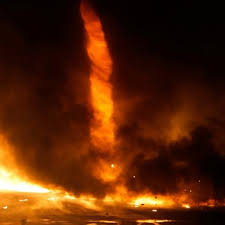 “I think God is about to purify the world with wind and fire.” The words didn’t come from a fire-breathing televangelist but from a guy who gave me a ride home from the car dealership after I had dropped my vehicle off for repairs. He had asked me what I did for a living. I had swallowed hard and told him I was a pastor. I’ve played the “what-do-you-do” game for long enough to know that people often choose one of two options when they obtain this piece of information: 1) shut down the conversation, assuming that you are a peculiar sub-species of humanity called “religious” and are therefore some combination of uninteresting, untrustworthy, and weird; or, 2) launch into the story of their lives, including whatever theological speculations might happen to be on their minds. This guy, obviously, chose the second option.

Whenever people talk about how they think the end of the world is nigh, it’s usually because they think the world is going particularly badly. Immorality is rampant, secularism is advancing, families are breaking down, natural disasters are more frequent, wars and rumours of war are everywhere, etc. Or you are in the middle of a blizzard on October 2, as we (incredibly) were yesterday. You don’t often hear people speculating about the final judgment on beautiful days when the sun is shining and the flowers are blooming and all seems to be well in the world. The world is only about to end when things are falling apart.

And so it was in this case, too. Las Vegas was obviously on our minds. Also, the story out of Edmonton where another angry man turned a van into a weapon. And, of course, the earthquakes and hurricanes of September are still not too far in the rearview mirror. It’s easy to speculate on what’s going on in people’s minds in light of events like these. Criminals are getting more desperate and dangerous. Immigration policies are letting in violent terrorists. Natural disasters are God’s judgment on us for all our wicked ways. People have always struggled to cope with chaos and catastrophe and bewildering change. We have always sought a cause worthy of these effects that threaten to break us. An apocalypse will surely do.

The more I listened to this guy’s story, the more sympathetic I became. He had lost his wife to cancer in his forties. He had been left with four teenagers on his own. He had lost two other family members almost immediately after. He had been on the point of a mental breakdown. He told me he felt like he was being “spiritually terrorized, like Job.” No doubt. I could only shake my head at what he had endured. No wonder he felt like the world ought to get around to ending. His had certainly seemed to be.

I have noticed this with others who have suffered catastrophic loss, whether of a child or a spouse or facing a devastating diagnosis. I have seen people take a strange refuge in the most wildly speculative end time scenarios. The world is going to hell, society is breaking down, God is about to visit vengeance on this or that group of people (usually our enemies) for this or that real or imagined transgression (usually the ones that don’t tempt us). The world is going to be destroyed and only the righteous few will be saved (usually me and those like me). Those who are convinced that judmgent is coming (soon!) are usually equally convinced that they’ll be on the right side of it.

Earlier on, these sorts of conversations with those who were grieving struck me as bizarre. How could anyone find any comfort in these outlandish eschatologies? How on earth does the gloom and doom of an impending apocalpyse help with the loss of a child or a wife or a brother? But the more stories like this I hear, the more I think that I might kinda, sorta get it. The world is a scary, violent, evil place. Sometimes, it’s impossible to process the kind of pain that comes our way or that we see others enduring. Sometimes the only thing that will help us come to terms with our own worlds that seem to be ending is for the world itself to end. Someone needs to suffer like we do. Someone needs to pay. We can’t tolerate God tolerating all this awfulness. So we craft an apocalypse on God’s behalf. And we tell ourselves that it’s coming soon.

The shuttle driver and I sat in front of my house and talked for a bit about the end of the world. We agreed that the world has always been a bad place and that ever since the early church, Christians have imagined that the end was nigh. The bad stuff has looked different over the years. The existential threats have changed. The wars and rumours of war have migrated around the globe. We kind of chuckled, knowing that we were just the next in a long and not terribly inspiring line of people wondering if the world had finally gotten bad enough for God to come in righteous judgment.

But still, he said, “I think it’s coming soon…”

From: Current Events, Eschatology, Stories on the Way, Suffering, Theology
← Selling Sex
Talk to Me, Talk for Me →
5 Comments Post a comment