Thrashing Around in Narcissus’s Pool 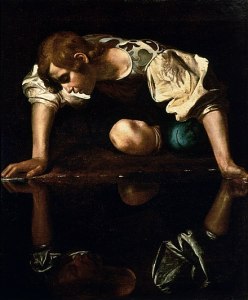 The opposite of love is not hate but self-love. The opposite of faith is not atheism but self-deification. Both love and faith (love of God) offer true freedom–release from the harshest prison, imprisonment from oneself.

So begins a chapter entitled “Narcissus’s Deceptive Pool” in Tomáš Halík’s I Want You to Be. I’ve long thought that the opposite of love is fear. But the more I read and reread this statement, the more I was convinced that Halík was on to something.

When my daughter was a toddler, I would sometimes catch her staring at her reflection in one of our large cooking pots over dinner. She would make faces, giggle, stick her tongue out. It was lots of fun. Occasionally, though, she wouldn’t even hear what we were saying to her, so transfixed was she by her own face staring back at her in the pot. One day, I decided to tell her the tale of Narcissus staring at his reflection in the pool so long that he eventually fell in and drowned. It might have been a bit much for a two year old. Perhaps not my finest parenting moment. But the image stuck with her. She still talks about looking at herself in that cooking pot. And about old Narcissus.

At any rate, the chapter is a fascinating and profoundly sobering diagnosis of our cultural moment, at least in the west. I was struck, in particular by a few paragraphs that have chilling relevance given the events of last weekend in Texas. Halík talks about the mass shooter as the paradigmatic narcissist:

I suspect that the ever more frequent phenomenon of “mad gunmen,” who suddenly, out of the blue, start to slaughter people around them unprovoked, isn’t simply a product of online “conflict games” and action horror films in the media; such dangerous, implements tend to be only accelerating mechanisms or triggers. It would seem that it is often the tragic expression of an individual’s anger, the anger of someone whose narcissistic image of himself and the world has been shattered by reality. In his eyes, a society that has failed to operate according to his notions deserves nothing but destruction. The ideological gloss (reference to religious or political symbols) tends to be simply “added value,” simply a drug that the perpetrator needs in order to intoxicate and desensitize himself, to give himself courage for the deed.

In the past the collapse of the narcissist’s world most likely led to suicide (who knows whether Narcissus’s drowning in the mythical story wasn’t actually an indirect allusion to suicide). These days suicide seems to be accompanied or even replaced by the murder of others–and the more, the better. The martyrs’ paradise, cult status in a religious or political sect, and coverage in the media are ways by which Herostratus’s present-day emulators try to “survive their deaths” and achieve fame transcending death: a caricature of eternity. The are often driven by a wish projection not unlike the mad endeavors of the most pathological narcissistic megalomaniacs of history, from Nero to Hitler, to ensure that the spectacular backdrop to their suicide will be a burning megalopolis with piles of corpses. The idea of hell will not dissuade them from their deed: after all, hell has become a favorite stimulant the culture of mass entertainment… Nevertheless, the most extreme forms of immoderate self-love already carry the germ of hell within them: self-love of that kind turns into self-hate and self-destruction in the end.

It’s easy, of course, to talk about figures as universally despised as mass shooters as the ultimate expression of narcissism. But I think that we must not shy away from asking harder questions about the cultural context that we are creating that is making things like this more common. Is it possible that, in a cultural context that trains us daily in countless ways that we are the measure of all things, that reality exists to be shaped by us according to our preferences, a world where we increasingly exist in ideological silos walled off from one another, a world where we can create and curate news feeds that deliver to us only that which will confirm our view of the world, a world where our young people are socialized into understanding themselves as commodities to present for the world’s consumption and validation (or, at least as frequently, scorn and derision), that this kind of violence will become increasingly common?

Is it possible that the individual lashing out at the world in unspeakably violent and evil ways is, in, fact a toxic icon of the god that we have preferred to the living God? We have been training ourselves, in countless ways, to worship wrongly. For worship we will, no matter what we might pretend to the contrary. We will have our gods, even as we are busy congratulating ourselves on rejecting them. And the self is, and has always been, a terrible, inadequate, and violent god.

What’s the solution? Well, according to Halík, it’s not complicated:

What can bring about the true conversion and healing of the culture of narcissism and its human products? The answer is easy, though hard to achieve: humility and love.

On one level, this sounds laughably trite. He might as well just say that the answer is rainbows and unicorns. Right, we should just tell mass shooters to embrace humility and love. That should work. But on another, deeper level, he is of course absolutely right. Humility: I am not the measure of reality. Love: I was made for God and for others. In other words, the solution to narcissism is proper worship. This is the only release from the harshest prison, imprisonment within oneself.