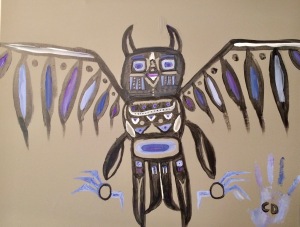 I get defensive when I listen to episodes like the one that aired today on a special edition of The Current. I’m not particularly proud of my instinctive reaction, but there you go. The episode was called “In Care and In Crisis: Canada’s Indigenous Child Welfare Emergency.” It deals with the deeply troubling realities faced by indigenous kids across Canada who are removed from the care of their biological parents and placed into foster care. The word “crisis” is no overstatement for the present situation. If you have any doubt (and care bear the heart-rending sadness), read this piece from yesterday.

Yet, I still get defensive. The reasons are obvious enough. I am the white parent of indigenous kids which is sort of a troubling position occupy in our present cultural climate. Worse still, I am a white Christian, which immediately locates me in an odious category that has done indigenous people historical harm. Even worse yet (if this can be imagined), my indigenous kids are presently attending a Christian boarding school in Saskatchewan! Never mind that this was a choice that they made. Never mind that they will learn far more about their own history and culture and from a more nuanced perspective at this school than they would at public school. Never mind that my wife is beating a steady path to Saskatchewan and back nearly every other weekend to see them. I know very well that these are some suspicious optics. We might as well out ourselves as dirty colonialists. Come to think of it, I probably just have.

To top it all off, I have the temerity to imagine that we are doing something good in all this. When my wife and I decided to adopt way back around the turn of the century, we had to wrestle through all kinds of questions about nature and nurture and the relationship between the two. We imagined that the “success,” however defined, of a kid was probably mostly down to nurture. Yeah, nature played a part, but probably a small one. Nearly seventeen years into the journey, we’re probably a bit less naïve. I don’t know if it’s 50/50 or 60/40 or 70/30 or what, but we obviously realize that the whole tabula rasa thing is a myth. There’s no such thing as a blank slate, whether it’s mixed race adoptions like ours or raising your own biological kids. Nature and nurture are always mixing and mingling and interacting in ways that we can probably barely even understand or discern. So it goes. This is how human beings grow.

But I know and have seen enough of the situation that our kids would be facing if they were still with their biological parents to stubbornly believe that they are better off with us. I know that we are certainly better off with them. Even though they are not immersed in their history and culture, even though there are inevitably losses that come along with whatever gains have come their way by virtue of being a part of our family, even though there is a part of their story that will likely never take root and grow in the same way that it might otherwise have, I still think that we did the right thing for the right reasons and this was God’s will for our family. And I bristle when it is suggested that we are somehow part of the problem. A selfish response? Perhaps. It certainly wouldn’t be the first time…

The system in Canada is screwed up, without question. Real and devastating harm is done to indigenous kids in and by a foster system that too easily treats human beings as commodities to secure funding. And yes, there is a grim and guilty history that provides the dark backdrop and subtext to so many of these problems. But I get nervous when I see whole categories of people being written off as “destroyers of indigeneity” or agents of cultural genocide or some such thing. I have sat with parents from the “Sixties Scoop” generation. I have heard the stories of anguished foster parents. I have friends who are adoptive parents and are wrestling through these issues with the very best of intentions. Almost without exception, these people were trying to do something good in an awful situation. They loved, and in many cases continue to love these kids. Are there exceptions? Are there nasty stories out there? Sure. There always are. Do we give a free pass to everyone who has “good intentions” No, of course not. But neither do we consign those working for good within broken structures and painful histories to the outer ring of disdainful darkness because they cannot be or provide everything that a given child  might need to come to terms with their own story and to chart a better way forward.

Before pressing “publish” on this post, I spent some time rereading the article I linked to above. It made me weep. This poor girl, passed around from home to home, struggling to know who she was or where she belonged for nearly all of her fifteen years. But as I read, it occurred to me that it wasn’t her biological mother’s indigeneity whose absence this girl seemed to most keenly feel, it was her love, her care, her time. It was the normal rhythms and routines of daily life—watching videos together, laughing about something they saw on Facebook, sharing meals. It was the utterly ordinary dailyness of coming and going and coming back again to something and someone stable. This is by no means to suggest that culture is unimportant or disconnected from the reasons why such stability was absent in this girl’s life. But I am convinced that cultural and ethnic categories are not the ultimate categories when it comes to helping kids flourish. Love and care, stability and security are. At the very least, these can provide a healthy framework within which to work back from and consider questions of culture and ethnicity and belonging. So it seems to me, at any rate. But then, I would say that, wouldn’t I?

After taking my daughter to the doctor this morning, we dropped by the church to say hello at a seniors coffee hour. There, she was greeted by smiles and hugs and more cake than she would have cared for. She was conscripted to play piano in church on Sunday. She was fawned over by a wide array of embarrassingly white and Christian folks who love her dearly and who she loves in return. On the way home, she told me that one of the things she misses most while away at school is her family… and her church… “Which is kinda like family anyway, right?” I couldn’t help but smile.

Whatever else might be said about the word “Christian,” it seems to me that at the very least it points to a hope that transcends tribe and tongue, relegating these distinctives, important as they are, to the category of “penultimate” rather than “ultimate.” It locates us all in pretty much the same position: God’s adopted kids, dearly loved, honoured, and called to extend that love across every boundary that might occur to us or be placed in our way.

The image above was painted by my daughter when she was twelve or so. It hangs on the wall just outside my home office.