On Mixed-Race Adoption, the US Open, and How We Play the Game 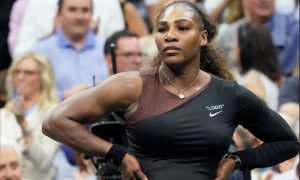 I spent my morning commute listening to the first few minutes of an interview with David French on the Ezra Klein show. I know next to nothing about Mr. French, but Klein made a passing reference to a recent article about mixed-race adoption he had penned for the Atlantic called “America Soured on My Multiracial Family.” For obvious reasons, the topic piqued my curiosity. Aside from our family’s own adoption story, I have several friends who are walking this road as well. It’s a road whose contours have changed over the years, at least so it seems to me. I was curious to hear French’s take on things.

The article mapped a fairly familiar trajectory. French notes that from 2010 to the present, public perception of mixed-race adoption has soured considerably, at least in some circles. Where it was once deemed an admirable endeavour, it is now often seen as a form of cultural genocide and racial/religious imperialism—a deprivation of children’s identity, and a transparent, if expensive, form of virtue signalling. I’ve not experienced anything remotely as nasty as the experiences French describes in his own story, but I have noticed the “souring” trend he speaks of toward families with white parents and non-white children over the last decade or so. Whatever one’s motives might be in choosing to adopt across racial lines, the current perception is often that it is a violation of one of our most cherished cultural ideals which is, of course, the individual and her identity.

Which leads me, naturally, to the US Open. Last week, like many, I watched Serena Williams’ meltdown in the US Open women’s final against Naomi Osaka (whose story is an interesting study in identity in and of itself). Williams was deducted points for, alternatively, receiving coaching from the stands, destroying her racket, and verbal “abuse” of an official. As I watched the scene unfold, I, like many, thought, “Oh, the reaction to this is going to be interesting” (this is a mildly depressing indicator of our cultural moment—we instinctively think more about the reaction to the news than we do about the news itself, well-trained creatures that we are). And the reaction was no less interesting for being predictable. What in the past may have been seen as an athlete losing control of her temper in the context of bad officiating, was recast along identity—in this case, gender—lines.

Williams was irate because male tennis players often get away with far worse behaviour without being penalized. She was and is right about this, of course. Anyone who has watched even a bit of tennis can think of examples of male players losing their minds and not receiving the penalties Williams did. Williams’ actions were actually rather subdued compared to, say, a John McEnroe in his heyday. It’s also undeniable that Williams simply lost her temper in the context of an uncharacteristically bad match (she was never beating Osaka on that day). And she’s not the first athlete to be on the wrong end of brutal officiating. At any rate, it gave the internet fodder for a few days.

Among the pieces that didn’t get much attention was former tennis star Martina Navratilova’s take on things in the New York Times. Navratilova made what I think is an insightful, if archaic-sounding comment:

I don’t believe it’s a good idea to apply a standard of “If men can get away with it, women should be able to, too.” Rather, I think the question we have to ask ourselves is this: What is the right way to behave to honor our sport and to respect our opponents?

It’s a question that seems at once eminently sane and yet almost incomprehensible in our present milieu. Navratilova is asking us, in a sense, to lift our gaze from our usual obsession with identity and ask bigger questions. Questions like, “How should the game be played? What is our behavioural obligation to the sport and to each other, regardless of our identity? Are there higher ideals that ought to command our adherence?” A quick glance at YouTube collections of male tennis players behaving embarrassingly badly makes it quite plain (at least to me) that rather than pushing for women to be treated like men by officials we should be petitioning for men to be treated more like women.

But whether it’s with respect to mixed-race adoption or tennis-playing millionaires, it very often seems that we are increasingly incapable of imagining that there could even be bigger questions than those of identity. This seems to be the fault line of our day. How we play the game matters less than who is playing the game, who is winning and, more importantly, who is losing. David French says that he adopted across racial lines because of his allegiance to a higher vision of how “the game” should be played. He is a Christian who believes it is his duty to help the most vulnerable, and that the kingdom of God draws us across racial boundaries and creates a new humanity of love and unity. These convictions are ultimate, he says, not racial identity. And for this has family has received a healthy dose of abuse. Martina Navratilova says that the sport of tennis has a code of respect and conduct that ought to compel all athletes, regardless of their gender. For this, I imagine, she has received no small amount of scorn. This is our cultural moment. This is where we live.

I should hasten to add that I do not consider questions of identity to be irrelevant. Not even remotely so. I think Williams was right to push against what seems to me an obvious double standard in tennis officiating. I think people are right to ask hard questions about all the complexities of mixed-race adoption (and there are indeed many). It is foolish, dangerous, and at times oppressive to imagine that the game isn’t experienced differently by different players in different contexts. No, identity is absolutely not irrelevant. But it’s also not ultimate.

From: Adoption, Culture, Current Events, Discourse, Ethics, Gender/Sexuality, Race, Sports
← Life and Love, In Progress
Who Can Discern Their Own Errors? →
3 Comments Post a comment