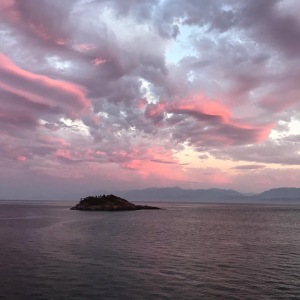 I’ve been thinking a lot lately about beauty. This is perhaps a strange thing to be thinking about in a year as ugly as 2020 has been and may yet be. I could catalogue all the ways that 2020 has under-performed but this is hardly necessary, right? You’re all sentient beings and have likely been tethered to your screens just like everyone else during this pandemic. And at any rate, one gets tired of obsessing and complaining about ugliness after a while. There is a seemingly limitless supply of it and the outrage/fear/anxiety machine of the internet keeps it ever before us. Perhaps some more pleasant fare will be welcome.

I just returned from a lovely ten days or so with my wife in British Columbia. We are at that blessed stage of life where our kids have crossed the threshold of adulthood and have summer plans of their own. This afforded us the opportunity of something almost like a second honeymoon. We had planned to go to Europe this summer to attend a wedding and visit friends and anticipate our twenty-fifth anniversary this fall but, well, COVID. So, plan B was to meander out west.

Our pace was leisurely, the weather was gorgeous, the mountains stunning, as always. We made a pact before our trip to avoid any and all chains for our dining options, so we stopped at little local coffee shops and pubs and restaurants along the way. We spent a few days in the Okanagan snooping around vineyards, doing wine-tastings, laying on the beach, etc. We dropped in on my brother and his family for a weekend and spent a lovely day in downtown Vancouver. And then it was over to Vancouver Island where I hadn’t been for nearly a decade since we lived out there. We stayed at this little place on the ocean almost at the very southernmost tip of the island. Our balcony was literally on a rock face looking out at the Strait of Juan de Fuca across from Olympic National Park in Washington. We looked down on fishing boats and sea lions and once (incredibly!) an orca. The view was stunning.

One day last week, we decided to go whale watching. My wife sort of had to drag me along, truth be told. I grumbled that it was too much money and we probably wouldn’t see much anyway. But my wife is persistent and eminently wiser than I am. The temperature was mild and the ocean gloriously calm as ten or so of us set off from a small-town harbour in pursuit of whales. Humpbacks are usually easier to find, our guide said, but there was talk of a pod of orcas closer to the American side of the strait. We were excited. And then, after about twenty minutes blasting along the surface of the Pacific, there they were! Our guide killed the engine and we just sat and watched and listened to these magnificent creatures. We saw them go down for a few minutes and then re-emerge somewhere else on the horizon. The sound of their blowholes echoed across the peaceful calm of the day. It was marvellous.

After half an hour of watching them from a distance, there was a gap between sightings. Had we lost them? Would they pop up somewhere far away? I had been recording them on my phone and was tempted to press “stop” but I kept it going just in case. You never know, right? And then, incredibly, they surfaced mere meters away from us. They seemed to be coming straight toward us! A massive male and about six or seven females. My wife later confessed to being a bit nervous at this point (can orcas capsize a small boat like ours? Probably… ) but I was too giddy and clueless to be frightened. I just wanted to make sure I didn’t miss them! And these stunning creatures swam within touching distance of the front of our boat. One or two even went right underneath us. You could almost feel the spray out of their blowholes. It was one of the most incredible things I’ve ever seen.

Given all the ugliness and uncertainty in our world right now, this experience and contemplation of beauty was cathartic for my soul. And it led, quite naturally, to worship. I know that some people can have experiences like this and remain uninterested in meta-questions of beauty’s source and telos. I am not among them. The appearance of artistry, for me, implies an artist. I know that many remain unmoved by arguments of this sort. Why attribute to God what can just as easily be explained by chance? Well, sure, maybe. I have no illusions that one can make anything like a decisive argument for God’s existence from an appeal to the beauty and order of the natural world (especially given the coterminous existence of all the aforementioned ugliness in the same world). Is it logically possible that things like art and music that evoke human love and wonder are all the result of nothing more than time and chance? Sure, it’s possible.

But it sure seems unlikely, at least to me. Every explanation of what’s “really” going on when we are reduced to mute awe or tearful reverence or irrational love seems to somehow reduce it something less than what we actually feel or how we would ever describe the experience. Whatever we might think is going on when we have these transcendental aesthetic experiences, it’s thought to be just some confused expression of biological utility. Everything that we imagine expresses the deepest, most irreducible and exalted parts of our humanity is relegated to the explanatory register of group selection or adaptive fitness. The things that we say mean the most to us turn out not to mean very much at all. We become impenetrable mysteries to ourselves—these strange creatures that need to console themselves with exalted fictions about what are, at rock bottom, more or less elaborate survival strategies.

Could this ruthlessly pragmatic story of adaptive utility be what is really going on when I marvel at the sight of an orca or watch a sunset over the ocean or celebrate a love that has lasted over a quarter century? Sure, I suppose. But I am not myself persuaded. I think too highly of things like beauty and love and wonder to imagine that these things don’t somehow point beyond themselves.