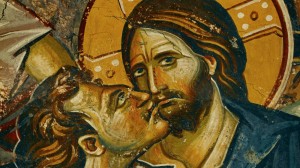 A strange thing happens on the Wednesday of Holy Week. Jesus is in the home of Simon the (former) Leper when an unnamed woman pours out an expensive jar of perfume on his head. It’s an extravagant waste. It is done with little evident regard for the cost or for what those gathered might think. And Jesus calls it a “beautiful thing.”

What’s beautiful about it? Jesus supplies the explanation. The woman has simultaneously anointed Jesus as king and prepared his body for burial. I don’t know how much this woman knew about what she was doing. Did she intend all this symbolism or was this the interpretation Jesus gave to her actions? It’s not clear. But I do know that this unnamed woman seemed to “get it” more than the men in the story. Not for the first or the last time.

Jesus’ disciples would never listen when Jesus said he was going to die. Peter famously rebuked him for it. This will never happen to you! And Jesus promptly compared him to Satan and told him to stand aside. He was out of step with God’s purposes and plan. The men who walked and talked with Jesus, who sat at his feet for three years, could not conceive that Jesus had come to Jerusalem to die.

Like at the empty tomb it is a woman who gets it first. This unnamed woman somehow knows that Jesus will die. She doesn’t try to talk Jesus out of it or deny it or pretend it’s something other than it is. She somehow seems to know what’s coming. And she spends her last moments with Jesus in an extravagant act of devotion and worship. Jesus memorably declares that “Wherever the gospel is preached throughout the world, what she has done will also be told, in memory of her.” And it has.

I learned a new descriptor for the Wednesday of Holy Week today. Apparently, some corners of Christendom refer to today as “Spy Wednesday.” This is because immediately after Jesus praises this “beautiful thing” that the unnamed woman has done at the home of Simon the Leper, we read these words:

Then Judas Iscariot, one of the Twelve, went to the chief priests to betray Jesus to them.

These things make us instinctively want to turn away, not least because we know that we are implicated in this awful story. We can’t distance ourselves from Judas, imagining that he represents some special category of sinner from which we are exempt. For we are all betrayers in big ways and small. We are spies, looking for a way to turn things to our advantage, to see if we can’t force God’s hand and get him to do what we want, listening to the wrong whispers, always open to the possibility that there’s an easier way than death and resurrection.

The Christian hope is that—impossibly—all of the ugliness of which we are capable is gathered up, healed, transformed, and woven into a tapestry of salvation. On the cross, Jesus becomes the symbol that was enacted two days prior. A “beautiful thing,” cracked open and poured out for the salvation of the world.

From: Uncategorized
← “You’re Not Very Nice”
The Monstrosity of Easter →
No comments yet