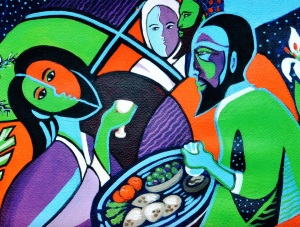 There’s a woman who calls me at the church with some regularity. She calls from two or three different phone numbers and uses a handful of pseudonyms. I have a file full of the various names and numbers she’s used. I’ll call her Mary. The stories she tells vary. She’s dying or mortally ill. She has to get somewhere far away for a surgery and needs gas money. Her kids are terrible and mistreating her (and will probably be calling me soon to ask for money—don’t give it to them!). Her grandkids need food. She needs a hotel room. She needs a thousand dollars, but she’ll settle for fifty. This has been going on for the better part of a decade. I suppose most churches have a story or two like this.

I have helped Mary out on occasion. Our church only gives out grocery cards, never cash, as a matter of policy. She doesn’t seem to remember this. At any rate, Mary phoned again this week. No sooner had I said hello than she had launched into a litany of afflictions and grievances and need. She barely paused for breath. I thought, “She’s probably so used to people hanging up on her that she tries to get it all out as fast as she can.” This made me sad. I listened wordlessly until she got to the ask. Eight hundred dollars, if I wouldn’t mind. I politely reminded Mary that we don’t give out cash. If a modest grocery card would help, I could certainly arrange that. She paused, before blurting out angrily, “Well, you’re not very nice.” And then she hung up.

I sat there for a while pondering this exchange. It’s never nice to hear that someone thinks you’re not nice. But of course, I know that Mary is not well and that she struggles in countless ways and for countless reasons. I wish I could write Mary a cheque for a thousand dollars and make her life better, but I know that her story is a lot more complicated than that. What stuck with me was the implied expectation in her protest. Pastors should be “nice.” Churches should be “nice” places that do “nice” things for people like her. They shouldn’t ask questions. They should be sort of like a benevolent ATM machine with unlimited funds. Wouldn’t that be nice?

Mary is not the only one who has this implicit set of expectations. I suspect many people come to church hoping for a “nice” experience. Something uplifting, warm, encouraging. It would be nice if the pastor would tell a joke or two, but nothing too off colour. The sermon should be practical and relevant. It should make Christian faith more intelligible and/or provide a bit of inspiration for the week ahead. There should be opportunities for social interaction with like-minded people and opportunities to do good things in the community. It should reinforce the general view that we are good people doing good things for a good God who smiles benevolently down upon us for our efforts.

I’ll confess that I do not like the word “nice” and I have limited appreciation for all the niceness in the preceding paragraph. It all sounds rather milquetoast to me. Jesus was called many things, but “nice” was not among them. Jesus said hard things to people. He confused and provoked and annoyed regularly. He spoke in enigmatic riddles. The lepers and whores and prodigals and outcasts were drawn to him like moths to a flame, while the learned and the respectable often kept their irritated distance. I remember once being in a conversation with someone said that if they were given the chance to sit down and have dinner with one historical figure, it would be Jesus. I guess I probably would, too. But part of me thinks it might not be an altogether pleasant meal.

I have two fairly basic convictions when it comes to the role of the church. The church should be a hospital for the wounded and broken down. It should be a refuge for those who have been shattered by circumstance, by their own choices, by the crushing weight of sin and failure and frustration. It should be a loving, healing embrace to those who have known little of love. If the church is perceived to be a place where nice, well-dressed people come to hear nice words and songs about a nice God, but where the sick and the dirty and the unwell are not welcome, then the church has failed spectacularly in its vocation.

Perhaps this is all just a long-winded way of saying that the church should be quite a bit more than “nice.” People like Mary need more than “nice,” even if it’s what they say they want. They need the embrace of a community. They need the dignity of a summons to what God, in Christ has called them to be. They need to confess their sins and to be forgiven. They need somewhere to lay down their burdens and to find rest for their souls. They need their heads to be lifted toward hope’s horizon. This is what we all need, even the nicest and most respectable among us.

I expect Mary will call again soon. When she does, I plan on asking her if she might be interested in more than a grocery card.

The image above is taken from the 2020-21 Christian Seasons Calendar. The artist’s name is Maureen Steward and the piece is called “Tapestry of Salvation.” It speaks to me of the One who offers not necessarily what we want but always what we need.