Why Wouldn’t I Forgive You? 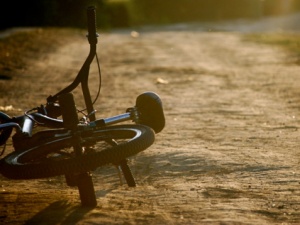 Moving to and setting up in a new place can be a stressful time. There is lots of assembling things, moving them around, running around buying this or that miscellaneous item, returning said item when it doesn’t fit or work as you expected it to, etc. Several consecutive days of this can leave one feeling a bit tired and, well, short-tempered. When you combine parents who are preoccupied with setting up a house with kids who are getting less attention than they are normally accustomed to, you have a recipe for frustration.

Well, a couple of nights ago, at the end of a long day of setting-up-house, the kids and I decided to go for a bike ride to end the evening. They wanted to see their new school, I needed to get out of the house, so we prepared to go. Only it wasn’t so simple. First a bike helmet couldn’t be located, and we spent twenty minutes hunting around for it. Then, as we were about to embark, my son (with his brand new bike) went flying down the mini-ditch by our driveway, crashed his front tire into a culvert, and flew awkwardly off his bike. My response to this completely ordinary occurrence in the life of a seven-year-old boy was to get angry at him for (I thought) wrecking his bike tire (turns out the bike tire was just fine), imperiling himself, and, most importantly, inconveniencing me. To my shame, I got mad at an excited kid for a routine mishap where no one was hurt and nothing was damaged (except for any enthusiasm and good-will that happened to be lingering about).

So we departed for our bike ride a beleaguered and ill-tempered lot, off to enjoy some “quality” time at the park. About halfway up Dingle Bingle Hill Road (I’m not making it up—this is seriously the name of the street next to ours!) I realized that I had, of course, completely overreacted and asked my son if he would forgive me for losing my temper. He nodded and I thanked him. But then he said something that was, in my completely biased opinion, quite remarkable and loaded with theological significance. After pausing and looking at me somewhat quizzically, he said “Why wouldn’t I forgive you dad? I always forgive you.”

“Why wouldn’t I forgive you?” This is an incredible question, when you stop to think about it, especially since more often than not the first question that pops into our head when we are wronged is the exact opposite one: “Why would/should I forgive you?” We instinctively think that forgiveness requires justifying, as if the default position is holding on to the wrong and the pain it causes and using it as leverage for the future. We remember wrongs and we hold them against those who commit them. This protects us (we think) from future pain and seems a necessary strategy in a world where grace is so rare and self-preservation seems the name of the game. The kind of people we are and the kind of environment we live in seems to require that forgiveness be carefully measured out, dispensed only when we can be certain that it will not bring us further pain. Forgiveness is certainly not something we can afford to promiscuously toss around whenever and wherever it is solicited. In this context, “why wouldn’t I forgive you?” seems a question that is naive at best, suitable, perhaps, for children who are (mercifully) not yet fully aware with the harsh nature of reality, but an inadequate, possibly dangerous approach for those of us who know better.

As the kids were playing at the park, and throughout the evening that followed, I found myself wondering what the world would look like if more of us operated with Nicky’s question in our minds rather than the alternatives we acquire from the culture around us. Would the world be a better or worse place if we were reckless rather than cautious forgivers? Nicky’s question is, fundamentally, a gospel question in that the attitude it reveals is good news for broken people who so frequently hurt and are hurt by others. It points to the basic gospel truth that God, in Christ, “recklessly” forgives human beings who alienate and distance themselves from him. To people such as us God says “why wouldn’t I forgive you?” Grace, not a grudging tit-for-tat reward and punishment system, is God’s final word for a hurting world.

Initially I wasn’t quite sure how to respond to my son’s question. It was one of those moments where things suddenly seemed very clear and you don’t quite know what to say or do.  Eventually, I simply smiled and told him “you don’t know how happy it makes me to hear you say that. Hold on to that for as long as you can.” I don’t know how long it will take before my son doesn’t forgive so instinctively and comprehensively, but I pray that the power of forgiveness retains its hold on him and all of us as we make our way in this grace-starved world. God knows our world needs more reckless forgivers, more people who rather than guarding themselves from the inevitable pain of living, seek to combat it as God has, through the power of grace, mercy, and forgiveness.

From: Conversations with Kids, Ethics, Fatherhood, Forgiveness, Hope, Random Musings, Stories on the Way, Theology
← Time and Reliability—Reflecting on “A Fine Balance”
When Wouldn’t I Forgive You? →
9 Comments Post a comment