When Wouldn’t I Forgive You?

In my previous post I admiringly reflected upon my son’s instinctive willingness to forgive and wondered what the world might look like if more people adopted this strategy. One commenter justifiably inquired as to the limits of forgiveness—if it really ought to be as “reckless” as I was recommending. His challenge to me was as follows:

As is usually the case, the best place to start is clarifying the important terms of a given discussion. “Forgiveness,” as I understand it is a twofold process that involves both the wrongdoer and the one who was wronged. I have found the work of Miroslav Volf extremely helpful here, particularly his articulation of a radical willingness to love and forgive those who commit even the most grievous evil against us provided that the evil or wrong is identified and acknowledged for what it is. In order for true forgiveness to be extended, the party which caused the pain must be willing to admit their wrong and seek reconciliation. To use the terms of his most celebrated work, “exclusion” must precede “embrace.” Forgiveness and healing cannot take place without the acknowledgment of the wrong that was done. 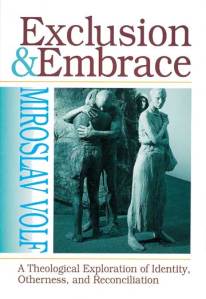 This is serious business for Volf, and involves far more than some limp expression of regret that someone “felt” wronged (I suppose these have their place, in certain situations, but often they seem to be a rather transparent attempt to retain the moral upper hand and present oneself as above reproach). What is necessary is that wrongdoing be acknowledged as objectively wrong and that one’s moral culpability be squarely faced. Only then, can genuine forgiveness be offered or accepted.

In Matthew 18:21-35, Jesus gives his disciples a rather harsh lesson on the importance of forgiveness for those who would call themselves children of God. Not seven times, but seventy times, he replies to Peter’s query about the extent of his obligation to forgive, and I think that we can safely assume Jesus was using symbolic language to commend an open-ended willingness to forgive. But to return to my friend’s question, what about the abuse that can take place when forgiveness is offered so freely in an evil world such as ours? Is such forgiveness not potentially irresponsible and self-destructive? Well, yes. And no.

First, I don’t think that our primary obligation is to be “responsible” in our deliberations about forgiveness. We are simply called to forgive our enemies, and those who do us wrong because this is the pattern of Christ. Having said that, we are not obligated to pretend that no wrong was done, or to blindly offer forgiveness where it is not appropriate to do so. My friend’s thesis deals with how Mennonites have historically understood and practiced pacifism/nonviolence and he has uncovered numerous cases where the ideal of “peace” has led to bizarre and, I think, biblically unwarranted acquiescence to evil. Jesus does not call us to passively accept evil and toss around a kind of vague “forgiveness” to all who hurt us. Embrace without exclusion is, as my friend has alluded to, highly irresponsible, self-destructive, and quite likely psychologically crippling.

But when forgiveness is genuinely requested—when the wrong done is squarely acknowledged and the consequences are accepted—I maintain that “why wouldn’t I forgive you?” is the proper Christian response to the evils and suffering that we face. To use the example in the previous post, my son would not have been obligated to forgive, or even justified in forgiving me had I not acknowledged that my response to him was wrong, and asked for his forgiveness. In a sense, “why wouldn’t I forgive you?” is a posture that is only appropriate once the conditions discussed above are satisfied.

In recommending “reckless” forgiveness, I was assuming quite a bit, in hindsight, but a commitment to forgive even once the appropriate “exclusion” has taken place is still, I think, highly countercultural and extremely difficult. We humans are capable of inflicting an extraordinary amount of pain on one another, after all, and it’s hard to let that go even when our offender acknowledges the nature of their offense and their responsibility in its perpetration. But as Christians our lives are to be patterned after a God who forgives his enemies. Every time we follow this pattern rather than the rival patterns on offer around us, we testify to the gospel truth that unmerited grace is the means by which the world is made new.

From: Ethics, Forgiveness, Gospel, Jesus, Theology
← Why Wouldn’t I Forgive You?
The Christian Bookstore: A Reintroduction →
4 Comments Post a comment