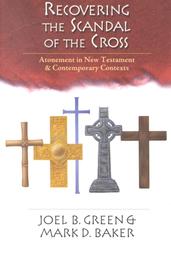 Controversy around the nature of the atonement continues to bubble beneath the surface in some corners of the Canadian MB Conference. Specifically, some have problems with a book by MBBS professor Mark Baker and Joel Green that questions the primacy of penal substitution and seeks to recover other important biblical metaphors that address what the cross accomplishes and why and how. Some think Baker’s understanding of the atonement ignores (or at least minimizes) God’s wrath and denies the fact that Jesus died as a substitute for our sins. There have been charges of heresy, and plenty of misunderstanding and miscommunication throughout the discussion.

I think that Baker is very often misunderstood, and that his understanding of the cross not only squarely falls within the bounds of orthodoxy but is also a fundamentally generous, winsome, and hopeful understanding of how it is that God works through the cross. But I’m not going to talk about that here. I’ve discussed my views of our tribe’s atonement debate elsewhere (here, here and here, for example) and see no need to restate them here.

What I would like to address is a question that comes up from time to time around theological debates like this one, namely, the “so what?” question. Why does it matter how the cross of Christ saves? Why worry about technical trivialities like which atonement metaphor (or combination of metaphors) is the right one? Isn’t it enough to just say that Jesus saves without fighting about the details? I’ve heard questions like these from pastors and laypeople alike. And I’m somewhat sympathetic to their questions. Heaven knows that enough ink (and sometimes blood, if we look back on history!) has been spilled over arcane and abstruse points of theological doctrine. Why get worked up about stuff like this? Why major on the minors? Why can’t we all just say “Jesus saves” and leave it at that?

Well, I think that how we think about the atonement is important (although not as important as how we live out the implications of the atonement), not least because it gets at our fundamental conception of who God is. I have had people in my office whose understanding of who God is and how he works is severely distorted and is psychologically crippling based on a conception of God as primarily a wrathful deity who must be placated. This is not just abstract theology. How we understand the cross’s role in God’s salvation plan touches down in real life. We all need to have a conception of a good God that is worthy of our love and our trust and our worship.

Well, over the last year or two, I have adopted a highly technical, precise, and theologically nuanced model for explaining the atonement to people. It’s called “The Crap Circle.” When I am talking with someone about the atonement, I often pull out a piece of paper and draw something like the diagram below. 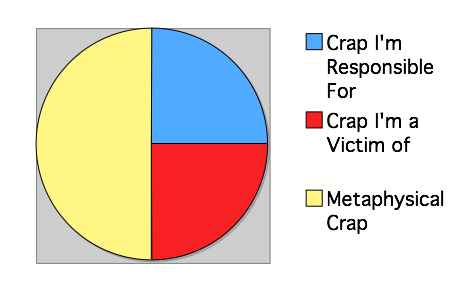 I realize this is a very complicated chart, but I will try to explain. 🙂

The circle represents all of the crap in the world. “Crap” is basically anything that does not contribute to the shalom that God intended for his world—all of the sin and evil and waste and decay and violence and destruction that has ever been a part of the world we inhabit. We don’t like crap. Crap hurts us and prevents us from flourishing as we were intended to. Crap doesn’t belong.

But there is more than one kind of crap! Indeed, there are probably many more than three kinds of crap, but I usually start with these.

Now, of course the math in the diagram above is not meant to be precise! I do not mean to suggest that you or I contribute exactly 25% of the crap in the crap circle or that “Metaphysical Crap” is only 50% or anything like that. Far from it! There is obviously a lot of crap overlap and some crap might resist easy categorization. The diagram is simply meant to acknowledge the variety and complexity of the crap in our world.

And the good news—the really, really good news of the gospel!—is that Jesus takes care of all of the crap in “The Crap Circle!” Not just the crap I’m responsible for. Not just the crap that is done to me. Not just the really big crap. All of it. I am not simply a forensic entity that needs to be declared “not guilty,” nor am I simply a victim who needs to be healed and restored, nor am I simply an incidental, insignificant part of a cosmos evolving toward wholeness. Jesus is God Incarnate, coming to judge and forgive and heal and restore and be victimized by and, ultimately, paradoxically, to defeat all of the crap in the circle.

A lot more could be said, but I’ve gone on long enough. It has been gratifying to hear a few “a-ha’s” on the occasions when I have used “The Crap Circle” to describe the work of Christ to people. I think it is liberating for people to hear that they are more than just guilty sinners. I think it it is attractive for them (and vitally necessary!) to see the cross presented in terms that go beyond individual acquittal. It is compelling for them to see the cross (and the earthly life, resurrection, glorification, and reign) of Christ in the context of the bigger picture of God reconciling all things to himself and leading his world to a crap-free future.

This is a good God. This is good news.