Respect the Right to Be Different 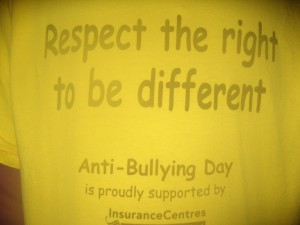 A few months ago the kids each came home from school with one of these lovely yellow T-shirts as a part of their school’s Anti-Bullying Day.”  Of course their cynical father’s mind instantly began to wander down all kinds of philosophical and theological rabbit-trails (the intellectual problems of pluralism, the political challenges of multiculturalism, etc), but on the less arcane level of how people actually treat those who think/look/act differently than them, I of course happily affirmed the T-shirt’s message!

So, this morning, as they both walked out of the house having (independently) selected this shirt for their morning attire, I thought it would be a good springboard for a reflection on the nature of our discourse, especially from a Christian perspective.  How are we talking to each other—especially those we disagree with, those who are different?  How are we doing with that whole “always be prepared to give an answer to everyone who asks you to give the reason for the hope that you have… with gentleness and respect” thing?

Last night I had the opportunity to see Steve Bell perform up in Comox.  I had missed his concerts in both Nanaimo and Victoria earlier in the week, and I figured a one hour drive was a pretty small price to pay to see a guy that I really admire on a whole bunch of levels.  His musicianship is fantastic, but many people—myself included—appreciate the storytelling and theological reflecting he does throughout his concerts almost as much.  Last night was no exception.  Like every Steve Bell concert I’ve ever been to, it was an evening well spent.

Interestingly, one of the things that Steve talked about at length between songs was the degradation of discourse, specifically within the Christian sphere.  Steven had just done a weekend conference with the lightning rod for criticism that is author/speaker/activist Brian McLaren.  McLaren’s political and theological views have obviously been the source of some controversy for a while now.  It seems that among the topics that had come up during the weekend was the hateful and sub-Christian ways that many have spoken to/about McLaren over the last decade or so.  He is often vilified in some rather shocking ways in the online world by those claiming to follow Christ.

One of the things Steve reminded us of at the concert last night was that the character of our discourse as followers of Jesus ought to match the message of the one we claim to follow.   Far too frequently, this is not the case—especially in the online world!  Far too often, when discussing some controversial issue or person, Christians can take not respecting the right to be different to amazing heights.  We can be among the most nasty and insulting people out there.  In our zeal for truth and doctrinal purity, we use language in disgraceful ways.  We “bully” those we are called to love and respect.  Rather than seeing our differences as motivation for further dialogue, we draw sharp lines, label and demonize those we disagree with, and, in a triumph of tragic irony, walk away feeling like we have somehow “defended the truth.”

The ironic thing is that while it is theoretically possible to “bully” someone into accepting this or that understanding of the truth, it is impossible bully them into love.  And love is, after all, the point of the whole show.  It’s what we claim God wants from us.  It’s what we claim motivated and continues to motivate God’s dealings with his people.  It’s fundamentally who God is.

So if God is love and he created us for love and if love is the point of this whole show, then hate-mongering and fearful and disgraceful speech are both inappropriate and ineffective.  They are inappropriate because they do not reflect the character and intent of the God who made us, a God who we see most clearly in the person of Jesus; they are ineffective because they do not and cannot produce the very thing that God most wants and that our world most needs.

From: Discipleship, Ethics, Faith, Jesus, Music, Random Musings
← A Series of Rebirths
The Psalms Sing With Us →
13 Comments Post a comment