Psalm 125: You Enfold Your People 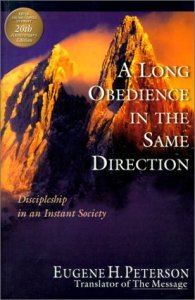 I am in the middle of preparing a sermon on Psalm 125 for this Sunday. Psalm 125 is part of the Psalms of Ascent, songs that the Israelites would sing on their yearly pilgrimages to Jerusalem for the holy festivals. It is a psalm that celebrates the God who “surrounds” his people, the God in whom security and goodness are found. Just as the mountains wrap around the city of Jerusalem, giving it security and strength, so the Lord is all around his people. It is a Psalm of confidence, security, and hope.

I’ve been re-reading Eugene Peterson’s A Long Obedience in the Same Direction this week—a book devoted to the Psalms of Ascent as a means of spiritual formation (and, interestingly, a book whose title is taken from a passage in Friedrich Nietzsche’s Beyond Good and Evil that mocks the idea of obedience as little more than a form of “bondage of the spirit,” slavery, and stupidity). Peterson notes that we are not a people particularly prone to feelings of security and confidence. Doubt, depression, uncertainty, anxiety—these, we are familiar with.  These are our near-constant companions. But not confident security. Here’s what Peterson has to say about Psalm 125:

The person of faith is described in this psalm as one who “cannot be moved, but abides forever.” But I am moved. I am full of faith one day and empty with doubt the next. I wake up one morning full of vitality, rejoicing in the sun; the next day I am gray and dismal, faltering and moody. “Cannot be moved”—nothing could be less true of me. I can be moved by nearly anything: sadness, joy, success, failure. I’m a thermometer and go up and down with the weather….

In truth, we probably aren’t that much different from the ancient Israelites who sang this psalm. If ever there was a group of “uneven performers,” it was Israel. Their confidence in God often seemed to be a fairly fragile and precarious thing. Their prophets were constantly haranguing them for their lack of fidelity to YHWH. Like us, the lure of other gods and other promises often proved too tempting for Israel to resist. Perhaps, like us, their singing of this song was both descriptive and prescriptive. It described a confidence and a security that had been experienced and was real, but it also provided a reminder of their high calling in bleaker and darker times. Perhaps, they sang this song as both a reflection of their experience and as an antidote to their anxiety and infidelity.

I’ve been continuing to read Pamela Greenberg’s The Complete Psalms over these last few months. At times, her translations leave me scratching my head, but there are times where I really like how she renders a psalm. Here is her interpretation of Psalm 125:

Those who trust you, God, are like Mount Zion—
which does not crumble, but continues forever.
Jerusalem—mountains wrap around it,
just as you enfold your people
from now until the end of time.
For the Creator does not let a group of the wrongful
rest in the land of the righteous,
so hands of the righteous
are not tempted toward harm.
Provide goodness, God, for those who are good,
and give to the steadfast their heart’s content—
but for those who grow increasingly twisted,
let them walk in their tumultuous deeds.
Peace be to those who struggle with God.

Regardless of our doubts and anxieties and fears, or even our security and confidence for that matter, God enfolds his people. He is the on in whom we live, move, and have our being. Both now and forevermore.

From: Books, Doubt, Faith, Hope, Poetry, Quotes, The Bible
← Do You Wish to Report This Error?
The Naked Anabaptist 7: People of Peace →
24 Comments Post a comment