An interesting article from last week’s National Post… Apparently, youngsters in Quebec daycare centres will henceforth be allowed to see religious imagery and symbols but not to have them explained:

The new policy will make it illegal for workers in the province’s network of subsidized daycares to teach their charges, aged five and under, about a specific religion. Teaching religious songs, including many Christmas carols, will be off limits, as will crafts with a religious connotation. Government inspectors will enforce the rules beginning next June.

“I want the young Quebecers who attend our daycare services to do so in a spirit of openness to others and diversity,” Family Minister Yolande James said as she unveiled the changes in Montreal. Ms. James said daycares will still be allowed to highlight “cultural traditions” rooted in a religious faith. “We will not remove Christmas trees from our daycare centres,” she said. A daycare could also display a crèche depicting the birth of Jesus, an aide to Ms. James said. “The line is drawn when a daycare centre teaches about the birth of Jesus, who is Mary, who is Joseph,” Geneviève Hinse said. “The line is crossed when there is a transmission of religion.”

I can’t say I envy the poor souls charged with patrolling Quebec’s daycares, searching for illicit Christmas carols or mentions of the word “Jesus.” Of course, it is difficult to know how/when/why to talk about religious themes in a pluralistic country like Canada. Policy-makers certainly have a difficult task. But as I read this article, I couldn’t help but think of Frederich Buechner’s words on the inconsistencies and inadequacies of tolerance as policy: 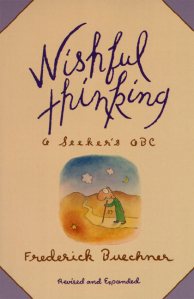 “It doesn’t matter what religion you have as long as you have one” is apt to mean really, “I couldn’t care less whether you have one or not….”

It is sometimes argued that no religion of any kind should be taught in schools. The name of God should not be mentioned, prayers should not be prayed, religious holidays should not be observed—all of this to avoid in any way indoctrinating the young. This is itself, of course, the most powerful kind of indoctrination because it is the most subtle and for that reason the hardest for the young or anybody else to defend themselves against. Given no reason to believe that the issue of God has any importance at all, or even exists as an issue, how can anybody make an intelligent decision either for God or against him?