Yesterday was one of those happy days when a little brown box full of books shows up on my doorstep, and I had just enough time to grab one of them as I ran out the door with my daughter to swimming lessons.  Twenty minutes later, after collapsing poolside nearing the end of what felt like a long day, I read these words that open William Willimon’s Why Jesus?: 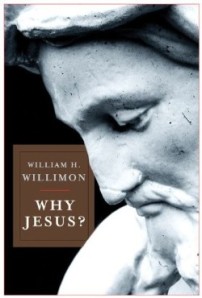 Why Jesus? Because he is the most fascinating person in the world. Into my life he came, unsought and uninvited, took over, and refused to go. He led me into dangerous territory. Only later did I learn this is typical. Though he is one with us, he is neither casually nor promptly known, not because he is arcane but because he is so very different from us, so difficult to categorize or to define, because he is also one with God. You can know him for many years, yet never really know him as well as he appears to know you. He manages to be unfathomable, deep, ungraspable, and yet oddly close, intimate, talkative, and relentlessly relational.

From: Books, Discipleship, Faith, Jesus, Quotes
← The Church, It is a-Changing
The God We Have →
4 Comments Post a comment