“You Thirsted for a Faith That Was Free” 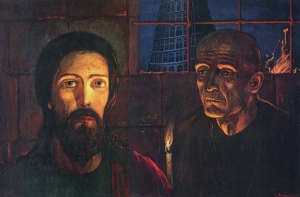 I have been spending some time with Dostoevsky this afternoon, rereading the famous “Grand Inquisitor” chapter from The Brothers Karamazov as I prepare for this week’s sermon on the temptation of Christ from Luke 4:1-13. In it, Ivan Karamazov asks his brother, Alyosha, to imagine that Jesus has reappeared in medieval Spain at the height of the Spanish Inquisition. The people recognize him, they rush toward him to embrace him, he even raises a little girl from the dead. But, despite seeing all this, the Grand Inquisitor arrests Jesus, and begins a lengthy interrogation. “Why have you come to get in our way?” he asks, “For you have come to get in our way and you yourself know it.”

The Inquisitor walks Jesus through the temptation in the wilderness, through his rejection of each of the devil’s three offers of shortcuts to securing human allegiance and devotion. Why didn’t you just give them bread? he asks. Why didn’t you dazzle them with a miracle to validate your message? Why didn’t you take power when you had the chance?  Things would have been so much easier if you had given those weak, ignorant people what they wanted, what they needed, what we, the church, have given them in your name! It really is a remarkable passage—both for its searing insight into human nature and for its profound indictment of the way in which the church has given in to each of the three temptations rejected by Jesus.

Of course, I can’t just get up and read Dostoevsky on Sunday morning (much as I might like to!), so I thought I would throw a few of the more memorable quotes from my afternoon’s reading up here:

Decide for yourself who was right: You or the One who questioned You that day? Remember the first question, though not in literal terms, its sense was: ‘You want to go into the world and are going there with empty hands, with a kind of promise of freedom which they in their simplicity and inborn turpitude are unable even to comprehend, which they go in fear and awe—for nothing has ever been more unendurable to man and human society than freedom! Look, you see those stones in that naked, burning hot wilderness? Turn them into loaves and mankind will go trotting after you like a flock, grateful and obedient, though ever fearful that you may take away your hand and that your loaves may cease to come their way.’ But you did not want to deprive man of freedom and rejected the offer, for what kind of freedom is it, you reasoned, if obedience is purchased with loaves?

We could push the question beyond the realm of freedom. What kind of obedience is purchased? What kind of devotion? Allegiance? Worship? In what ways is this temptation yielded to daily by the church and by individual Christians today?

[C]ould you really have supposed, even for a moment, that people would have the strength to resist such a temptation? Is human nature really of a kind as to be able to reject a miracle, and to make do, at such terrible moments of life, moments of the most terrible fundamental and tormenting spiritual questions, with only a free decision of the heart? … [Y]ou hoped that, in following you, man too would make do with God, not requiring a miracle. But you did not know that no sooner did man reject the miracle than he would reject God also, for man does not seek God so much as miracles…

You did not come down from the Cross when they shouted to you, mocking and teasing you: ‘Come down from the Cross and we will believe that it is you.’ You did not come down because again you did not want to enslave man with a miracle and because you thirsted for a faith that was free, not miraculous. You thirsted for a love that was free, not for the servile ecstasies of the slave before the might that has inspired him with dread once and for all. But even here you had too high an opinion of human beings.

Is this what Christ wants still? A faith that is free, not miraculous? A love that is offered, not purchased? Is this possible? Or is Dostoevsky’s Inquisitor right that God has miscalculated a bit, and has altogether too high an opinion of his creatures? Interesting things to ponder during these first days of Lent and as Sunday approaches.

The Image above is from Russian artist Ilya Glazunov’s Triptych, “Legend of the Grand Inquisitor.”