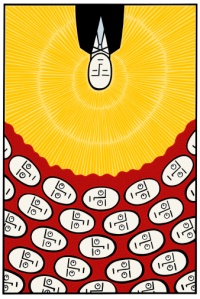 I was driving my son to guitar lessons the other day, trying to keep up while he talked a mile a minute. I was only half listening (shameful, I know), but in one of his stories I caught the word “priest.” This isn’t a word he uses often, and my curiosity was piqued. I’m always curious about how my son understands the weird and wonderful contours of the church/religion-land that his dad happens to inhabit. I think my world is a bit of an oddity to him. He knows that I read books and talk to (and at) people, that I busily bang away on my laptop, writing sermons, writing articles, writing, writing, writing. But I sometimes think he wishes I had a more respectable job. Like building things or selling things or fixing things or growing things… things you can see and touch in the real world. Or teaching zombie apocalypse preparedness courses. You know, something useful.

“So what’s a priest?” I ask him. He looks at me blankly for a minute as if to say, “Aren’t you supposed to know these kinds of things? Doesn’t one of your books explain this to you?! Of all the things you don’t know, shouldn’t this be one of the ones that you do?” But instead, he says “I dunno. Isn’t it kind of like you? Like the boss of the church?” I pause and weigh the merits of broaching the subject of ecclesiological differences across denominational divides, parsing the nuances of sacramental understandings of the priesthood vs. the priesthood of all believers, etc. In the end, I (wisely) decide against course of action, choosing instead to say something deep and profound that will no doubt live long in my son’s memory.  “Uh, yeah.  Kind of.”

The boss of the church.

It will probably not surprise readers of this blog to discover that this is not among the preferred ways in which I understand the nature of my role (those familiar with Mennonite ecclesial structures will be even less surprised—in Mennonite churches, pastors are the bosses of precisely nothing 🙂 ). But even leaving theology aside, I am and have always been extremely reluctant to consider myself the “boss of the church” or the “religious professional.” I squirm when people call me “Pastor Ryan.” I have thus far resisted ordination. I cringe when people make comments about how I am holier than others or how “We’d better stop talking about that, there’s a pastor in the room,” even when I know (hope?) they are joking. The thought of being a “religious professional” makes me very uneasy, even though I know that I am one and that this is the grid through which others see me.

There are a number of reasons for my discomfort. On a purely selfish level, I don’t want to be seen as the “religious professional” because this is not a very highly esteemed category in our culture. People are often either highly suspicious of religious professionals due to the bad behaviour of power-hungry, scandal-prone men who inevitably make headlines for their bad behaviour (and then make even more headlines—and often a great deal of money—for very public displays of repentance and rebirth… Rinse and repeat), or they view them as antiquated, irrelevant oddities from a religious time and place we have, thankfully, moved beyond as a culture.

Given this postmodern, post-Christian cultural reality where religious professionals are often viewed with suspicion and/or bewilderment, and given that we live and work in the general context of shrinking attention spans, fleeting loyalty, an “entertain-me” mentality and barely concealed apathy, it can be a challenge to understand just how the role ought properly to be understood and practiced. Are religious professionals institutional administrators? Salespeople? Entrepreneurs? Therapists? Motivational speakers? All of the above? And how do we tell if we’re being good religious professionals? If the customers are happy? If the building is full? If there are all kinds of shiny programs to point to? Who’s to say? I was having coffee with a pastor just this morning and we discussed the challenges of working in a job where results are so difficult to quantify. It’s not like you reach the end of your day at the religion factory and proudly point to the six religious widgets you managed to assemble that day that are now proudly sitting on the shelf. No, not at all.

But all this is pretty well-known stuff. For me, the most uncomfortable part of being a religious professional by far confronts me when I read the New Testament. The New Testament makes for very difficult reading as a “religious professional.” When I was growing up, I always assumed that the Pharisees and the Sadducees were something like the villains in the story of Jesus. But they weren’t. They were the ones who had devoted their lives to God, studying the Scriptures, interpreting them for others. They were the ones with graduate degrees and doctorates in theology. And yet there is no group that Jesus clashes with more consistently or denounces more angrily than religious professionals. Brood of vipers, sons of hell, whitewashed tombs, hypocrites!! Woe, woe, woe to you, who claim to speak for God and yet do nothing but pile the burdens of your stifling religion on to the backs of others! Woe to you who presume that God can be managed and packaged and sold… Woe to you who use religion to keep yourselves busy on the outskirts of the divine, yet end up blocking people from the God of life.

It is a scary thing, to read the New Testament as a religious professional.

As I was thinking about what my son thinks of the work his dad does, and about the work that I do do (or the work that I think I should do), and about this terrifying business of being a religious professional, my thoughts returned to Easter. We are still in the shadow of the cross and the empty tomb, after all. Perhaps the first (and best… and last) thing that the Christian religious professional ought to do is simply point, wide-eyed and open-mouthed, to the cross where Jesus forgives the religious professionals (and others) who don’t know what they are doing, and to the empty tomb where life comes crashing through all of our death-dealing ways, religious or otherwise.