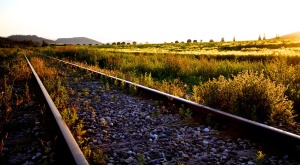 I spent part of my day off yesterday watching The Secret Life of Walter Mitty. There’s a great scene and a great line near the end of the film where Walter Mitty (played by Ben Stiller), the “negative assets manager” for Life magazine and, at least as we are led to believe at the beginning of the film, quite possibly the world’s dullest human being, finds himself, through a strange set of circumstances on top of a mountain in the Himalayas. In the scene, he has just (literally) stumbled across Sean O’Connell (played by Sean Penn), the reclusive, elusive world-travelling photographer whose work Walter has been processing for many long years at the magazine, and who he has been trying to find for the whole film.

O’Connell has been on the mountain for days trying to capture a photo of an incredibly rare snow leopard. In the middle of his conversation with Mitty, the leopard appears at the other end of his lens. “Look!” he tells, Walter. Walter looks through the camera and sees the majestic creature. Then he pulls back and looks at O’Connell, who is just staring at the leopard. Incredulous, Walter asks him why he isn’t taking the picture, before the leopard disappears! O’Connell pauses, looks at Walter, and says that sometimes he likes to just enjoy the moment as a human being without having to capture it. Sometimes he just likes to be a witness to beautiful things. And then, the line that stood out to me: “Beautiful things don’t ask for attention.”

Beautiful things don’t ask for attention. And yet, this runs entirely against the mantra of twenty-first century life where we seem to have a felt need to broadcast our lives to all people at all times. Every beautiful thing we encounter is instantly Instagrammed, tweeted, or somehow transmitted to the screens that have come to dominate and define our lives. Every interesting idea, every well-written poem or article, every inspiring sunset, every striking image, every noble cause, every moving film we see or novel we read… The formula is, by now, predictable. Wow. Click. Share. Next.

Beautiful things themselves might not ask for attention, but we certainly do on their behalf. The things we share don’t even really need to be beautiful. We’ll settle for mildly amusing or controversial or cute or just plain weird. Beautiful is certainly better, but we’re not very picky.

I’m not against the sharing of beautiful things. Not by any means. I love the work of skilled photographers and poets and painters and musicians and writers. Truly, I do. I share all kinds of (what I deem to be) beautiful things in all kinds of ways.  Indeed I am, ahem, a blogger, which is a curious, and quite likely incoherent vantage point from which to criticize the culture of online sharing!  But personal hypocrisies and inconsistencies aside, I think the world would be a far poorer place if we didn’t celebrate beauty and invite others into it along the way.

Do we, the inhabitants of twenty-first century digital landscape, have the ability to simply be a witness to beautiful things, like Sean O’Connell with the snow leopard on top of the Himalayas? Is it ok if nobody ever knows what we saw or how it made us feel? Are we losing the ability to actually sit and savour beautiful things, so instinctive and impulsive is our desire to have something, anything, to share? Are beautiful things less beautiful if they are not digitally catalogued and pressed into the (often selfish) services we demand of them?

Beautiful things don’t ask for attention. Could the same be true for a human life? Could a beautiful life be, at least in part, one that doesn’t demand attention? Jesus seemed to think so. He regularly warned of the dangers of doing things to be noticed, doing things to secure the praise of others, doing things for the attention it would garner. He regularly pointed to the beauty of goodness done in secret, far from the greedy eyes of others, insulated even from our own voracious appetites for praise.

Beautiful things don’t ask for attention. Could the same be true for the church? Wouldn’t that be something? Alas, as in so many other areas of life, we don’t really seem to trust Jesus on this. We construct our pious empires of entertainment and attraction and religious goods and services, all the while screaming, pleading, imploring those around us, “Look at me! Look at us! For God’s sake (well, for our own sake, mostly), pay some attention!” I wonder what all of our frantic activity says about what we believe about the simple beauty of Jesus, of the gospel?

The (beautiful) image above is courtesy of Russell Berg at Seeing Berg.