Religious fanaticism is, regrettably, front and center in our collective consciousness again in this the summer of bad news. Whether it is Iraq or Israel/Palestine or other places around the globe, many people are quick to point to the role that religion plays in stoking the flames of violence and hatred.

And whenever there is violence associated with religion in the news, we can expect to see articles like “The God Effect” over at Aeon Magazine.  The piece, written by Patrick McNamara, seeks to locate the religious impulse in dopamine levels in the brain. There is, according to McNamara, a fine line between “benevolent saints” and “murderous fanatics.” And dopamine, apparently, is one of the main triggers for when this line is crossed.

A few quotes that stood out to me, followed by a few observations:

Suppose religion created spectacular individuals because it pushed them into looking for unexpected rewards—a sense of transcendence or the pleasure of doing good—rather than all the usual rewards such as money or sex that the rest of us constantly pursue. Pursuit of unusual ideas could likewise be facilitated by dopamine, heightening creativity, too…

Like the most creative scientists, the most consistently religious individuals would be motivated only by things that consistently triggered surging dopamine and the unexpected rewards circuits in the prefrontal lobes of the brain: awe, fear, reverence and wonder…

The same mechanism that enhances our creativity – juicing up the right-sided limbic and prefrontal brain regions with dopamine – also opens us up to religious ideas and experience. But if these brain circuits are pushed too far, thinking becomes not merely divergent but outright deviant and psychotic.

My first reaction after reading the article, and these paragraphs in particular, was to wonder just how familiar Mr. McCormack is with “religion” (it is, of course, highly problematic to speak about “religion” as some kind of generic category; there are many important differences between different religious traditions that are quite easily and regularly blurred whenever “religion in general” is discussed). The idea that religious pursuits are little more than a glorified dopamine quest seems a bit naïve. Yes, religion is about transcendence, awe, wonder, the pleasure of doing good and all that Hallmark-y stuff. But to speak specifically about the religious tradition that I am a part of, religion is also about dying to ourselves as we seek to have our priorities, pursuits, and inclinations reoriented according to what we believe is finally good and true. It’s not just about seeking pleasing sensations in the limbic and prefrontal regions of the brain. It’s about realizing that our pleasures and desires often need to be recalibrated, reoriented, or even mortified (to borrow an old, old word) in the pursuit of something that is bigger and more important and lasting than personal pleasure. 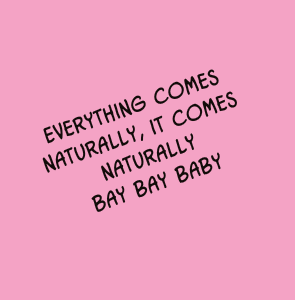 My second reaction was that it seems to me that we understand and utilize “what comes naturally” very inconsistently in our cultural discourse. On the one hand, we have articles like this one where the author would seem to be advocating the tweaking and calibrating of “natural” dopamine levels in order to attain that precise happy zone, somewhere between “benevolent saints” and “murderous fanatics” where we find the benignly religious, nice, compliant human being.  “Natural” brain states and their attendant behaviours are, in this case, something to be modified and adjusted in order to avoid unwanted social outcomes (namely, “fanaticism,” and all the undesirable things it produces). Nobody would ever attempt to justify religious fanaticism by saying, “well, it just comes naturally to them (look at all that dopamine, for crying out loud! What else could they do?!)!

On the other hand, though, “what comes naturally” is very often used to justify certain behaviours and dispositions. We see this most obviously when it comes to the many ways in which we are pleased to define and express ourselves as autonomous individuals. Whether it is our vocational inclinations and aptitudes or moral proclivities (or the absence thereof) or sexual preferences or whatever, the claim that we are “wired this way” is often understood to be the only explanation that could be sought or warranted.

So, when we are dealing with behaviours we don’t like—behaviours that we find puzzling or threatening or annoying or inconvenient (i.e., religious fanaticism)—their “naturalness” is seen as an obstacle to be overcome, a riddle to be solved. So, we hunt around in the brain states of the undesirables, searching frantically for the pernicious chemical combination(s) that are producing the undesirable consequences we wish to discourage. When we are dealing with behaviours we like, on the other hand, or at least are prepared to tolerate—behaviours that bolster and reinforce the ways in which we are pleased to define and understand ourselves—the “naturalness” of these behaviours is virtually the only explanation deemed necessary to justify them.

In the first case, biology is an impediment; in the second, it is a blueprint from which there can be little to no deviation. We make this shift in discourse quite frequently, in my observation, but we are rarely (if ever) clear about the whens, the whys, and the hows behind these shifts.

And, finally, we may be forgiven for wondering just how illuminating it is to say that religious devotion is associated with increased dopamine levels on the right side of the limbic brain. Every human behaviour is associated with some neurological story, after all. We could, for example, analyze the brain states of those inclined to write articles about the brain chemistry of religious people. We could wander down all kinds of exciting trails about how the increase or decrease of this or that neurotransmitter might affect the end product, or “create the experience” of this or that social scientist’s proclivity toward a reductionistic scientism. I haven’t read many analyses along these lines, though, and I don’t expect to any time soon.

I’m all for analyzing brain states. I think analysis of our brains can (and does) shed a great deal of light on the kind of creatures we are and on what’s going on “under the hood,” so to speak. But I think we are often too eager to claim far more than is warranted by the data gleaned from these sorts of analyses. And I think we are often far too reluctant to move beyond the story told by our biology—to take the next step of asking what this data might mean, how it ought to be used, and why.

From: Culture, Current Events, Epistemology, Ethics, Faith, Gender/Sexuality, Religion, Science
← The World Remains Divided
Riding the Storm (Or, What to Do When the Internet Explodes in Righteous Fury) →
3 Comments Post a comment