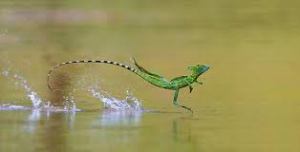 After one of the warmest winters I can recall in southern Alberta, we were greeted on Easter Sunday with snow. So much for the springtime resurrection metaphors, I suppose.

Which is fine. I’ve never had much use for the resurrection of Jesus as a metaphor anyway. At least not as just a metaphor. As I read through the four gospel accounts of the resurrection last week, again and again I was struck by how utterly unprepared and bewildered and terrified the first witnesses were by this turn in the story. The early church was literally shocked into existence, dragged reluctantly and confusedly from an empty tomb into the landscape of new creation. I think those first witnesses would find all of our enlightened “resurrection as hopeful metaphor” language rather amusing. At best.  Hope was something they had pretty much abandoned, until it showed up, wounds and all, and stared them in the face.

Anyway, like many other churches we have a tradition of placing flowers on the cross on Easter Sunday morning. The symbolism is powerful. Beauty and colour gradually taking over a crude symbol of torture and execution. Life overwhelming death. Each flower placed on this cross, a declaration of who God is and what God has done for the world he loves.  A beautiful picture of a beautiful hope.

And then, Easter Sunday is gone. And the world keeps spinning. And new creation looks no more or less likely than it did prior to all of our inspiring Easter Sunday resurrection words. We wonder if all those words really connect to anything that true or real about God or the world. We wonder if believing in something like a dead guy coming alive might be more than a little naïve and unsophisticated for intelligent, cultured folks like us. We wonder if it all might be wishful thinking—the sort of thing that we would like to be true, and all the less believable for it.

This morning I read this passage from Christian Wiman’s My Bright Abyss. They reflect well, I think, the experience of faith for many in the postmodern wilderness.

Sometimes it seems that I can happily hold all Christian tenets in an active abeyance, a fusion of faith and skepticism that includes and transcends literal and figurative truths, if I can hold fast to one indestructible fact (fact?!): Christ’s resurrection. This event answers every impulse, fear, and need of my imagination, quiets and clarifies the raucous onslaught of time, suffers me—the mute, destitute, unselfed seed of being that is most me—to understand what suffering is, and what it means.

But no. The reality wavers, the image fades like a reflection on the water, for under every assertion about God, including the one I am making at this very minute, the ground gives way, and once again I am left with the vital and futile truth that to live in faith is to live like the Jesus lizard, quick and nimble on the water into which a moment’s pause would make it sink.

The reality wavers, the image fades. The ground gives way, and the Jesus lizard skates elusively across the surface of the water. Nothing is as certain as we would like it to be.

We usually leave our flowered cross up in the sanctuary until most people are gone, and then bring it out into our church parking lot where it will stay for a few days. On Sunday, I was initially reluctant to expose our beautiful cross to the harsh elements of an unexpectedly wintry resurrection day. But a few people insisted that we do it anyway.  So we carried it out into the parking lot, and we planted it there in the slushy snow and gravel and wind.  It felt like such a shame to leave all those glorious greens and yellows and blues and pinks out there to fend for themselves.  But there they would stand, clinging to that cross for the next two days. 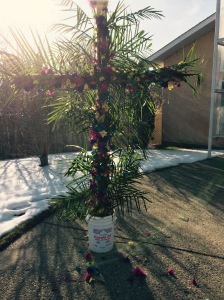 This morning I came in to church and was greeted by the image to the right. Our flowered cross was more resilient than I expected it be.  But the weather had obviously taken its toll.  And I thought, “Isn’t this kinda what life looks like after Easter Sunday comes and goes, after the lofty rhetoric fades, after we move back into the world where things always die? After the colour begins to fade, after the snow and the wind and the cold have taken their toll. After the world goes back to business as usual.  This cross, vulnerable and exposed, tells the story of who we are, doesn’t it? We who have been dragged from an empty tomb into the promise of new creation. We whose eyes and ears, like those of the first witnesses, have been shocked into the possibility of resurrection.

We are people who refuse to abandon hope, even when the colours fade, when the flowers fall to cold, hard concrete, even when optimism is battered and bruised by the wind and the snow, even when the Jesus lizard refuses to be confined within the parameters of our hunger for mastery and control.  We are resurrection people not because of the lofty rhetoric or the pretty flowers, not even because of the strength of our convictions, which can be an unreliable barometer indeed.

No, we are resurrection people because we are convinced—or we dare to hope, at least—that, inexplicably, God himself was battered and bruised on an ugly unflowered cross, but that the suffering and the dying were followed by a rising and a living again.  And that somehow because life-out-of-death is the story of God, it is our story, too.